CFE/Save the Sound president Curt Johnson reflects on the best deal he’s found—for his wallet and the planet.

When it comes to buying used cars, I’m cheap. I go for reliable, inexpensive, and preferably comfortable wheels. Earlier this summer, I was pleasantly surprised to learn an important bargain hunting secret—low mileage, first-generation electric cars are a BARGAIN. First I’ll talk about price, then how much cheaper they are to operate than any gas or hybrid car out there. So if you share my interest in saving money and bargain transportation, along with saving the planet, read on.

My wife Nancy and I debated about buying a new Nissan Leaf, which would have been around $21,000 out of pocket when we stacked the federal tax credit, the CHEAPR rebate, and the $5,000 discount thanks to the Connecticut Green Bank initiative. This is a pretty darn good deal. However, being thrifty, my wise wife asked me to check out the used electric car market. 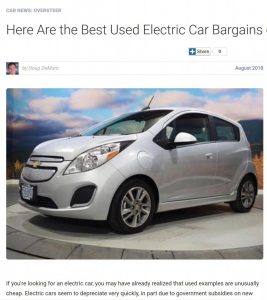 In my internet search, an Auto Trader article grabbed my attention, touting the bargains in used electric cars. This idea was confirmed as I dug deeper online for a used electric car. First generation electric cars, typically with a cruising range of under 100 miles between charges, tend to be the best deals. Used Nissan Leafs, Chevy Sparks, even the futuristic BMW 13, are selling at bargain prices with very low mileage. The article noted that a 2015 BMW with under 15,000 miles was listed at $15,000! Beemers for the working stiff? I love it!

(I know, I know, Teslas are fantastic. They go nearly 300 miles between charges. They are really cool with terrific styling. But Teslas tend to hold their value so the used-car price is higher.)

Ultimately, we landed our 2017 Smart Car EV with 5,700 miles for $9,995. In part, we chose this spacious little two-seater because we had leased a 2013 Smart EV model a few years back and knew how much fun and affordable to operate they are.

We live comfortably with the Smart Car’s 70-mile range and have a used Prius for long distance trips. My commute is a breeze and I love not wasting time at a gas station. Nancy tops off at her New Britain parking garage (for free). Our Smart Car charges overnight connected to a regular outlet at our solar-paneled home. Even in January, based on past experience, we will remain a net electric producer. This means our car is powered by solar and costs nothing to run. That’s right, $0.00. I like that price.

(Well almost nothing. I paid $2.75 cents to run my leased Smart EV a total of 18,000 miles during the lease period. Paying that one-time electric charge at a private charging station continues to irritate me.)

If you have not yet installed solar on your home (you will save $$ and the planet if you do) and instead charge your car from the electric grid, all of these used electric cars operate at the equivalent cost of 110 miles/gallon or better. Now that’s pretty darn affordable.

At CFE/Save the Sound we will continue to work with the Department of Energy and Environmental Protection, the legislature, and the Green Bank to pilot state incentives to bring down the price of used electric vehicles even further. That’s a good deal for Connecticut, since currently 40% of our climate pollution comes from transportation. I urge you to take a hard look at used electric cars next time you are in the market—or even now if you want to get ahead of the curve. They will be the least expensive car you will ever buy and operate.

Thursday, Aug. 18 at Noon, Webinar
Cleanups 101: How to Participate & How to Lead - Interested in hosting a cleanup but don't know how to get started? Join us as we discuss how to inspire your local community to get involved in waterway cleanups, review cleanup captain responsibilities & resources, answer questions, and more.