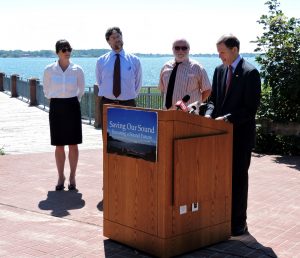 Protecting your land, air, and water takes constant vigilance at both the Connecticut and New York legislatures. That is where laws that clean up Long Island Sound and our rivers are made. It’s where companies trying to mine on the lands that clean your drinking water are stopped. And it is where the line to protect our planet’s climate is drawn. Save the Sound’s lawyers and advocates work with legislators, draft bills, and fight for laws that will make a difference to your family’s health and the environment you love. Here is a sampling of our victories over the years.

Cleaning and Restoring the Sound and Your Rivers

For years, the Connecticut Clean Water Fund, the state’s primary source for clean water projects, lacked proper management and funding. Save the Sound formed the Clean Water Investment Coalition in 2006 and worked with legislators to get the fund back on track. In the decade since, almost $3 billion has kept raw sewage out of waterways; cut Sound- and river-suffocating nutrient pollution; and helped communities like Bridgeport, New Haven, and Hartford invest in projects that naturally filter stormwater. In New York, Save the Sound worked tirelessly with a broad coalition of environmentalists, local government, and business interests to garner $2.5 billion for desperately needed water infrastructure investments in the 2017/2018 state budget.

Planning for the Sound & Our Shoreline’s Future

Over the last decade we’ve faced many fights to keep Long Island Sound’s waters open to all, protect it from unwise development, and adapt to a changing climate. Two key successes in long-range planning are the Blue Plan and the Long Island Sound Stewardship and Resiliency Program. The Blue Plan legislation created a Connecticut committee to work alongside New York. Together these stakeholders will catalog the Sound’s resources and uses, and plan a future that protects traditional water uses and empowers the Connecticut Department of Energy and Environmental Protection to address use conflicts and threats to fragile ecosystems. As intensifying storms, sea level rise, and warming waters made climate change impossible to ignore, we worked with allies and Connecticut legislators to establish a Stewardship and Resiliency Program. It will develop and implement resiliency projects to assist municipalities in mitigating flooding, protecting water quality, and minimizing damage to critical infrastructure.

Save the Sound has devoted significant funding and effort to reopen rivers to migrating eels in Connecticut. So in 2014 when the Connecticut General Assembly considered developing a new glass eel fishery, we successfully fought to see that investment and environmental benefit was preserved, not exploited. Allowing fishing of a species so depleted the federal government was considering listing it on the Endangered Species List was bad public policy.

Protecting Your Forests and Favorite Places for Future Generations

In 2001, Save the Sound formed the Coalition for the Permanent Protection of the Kelda Lands and secured the conservation of over 15,000 acres of utility company land across the state, including nearly 600 acres in Ansonia and Seymour that are now part of the Naugatuck State Forest. We followed up that victory with 2007 legislation that saved the successful program incentivizing water companies to sell their private lands to towns, the state, or land trusts for conservation without having to go to public auction, protecting them from cash-rich developers and shielding your drinking water from contamination.

Save the Sound fights to protect trees that provide community character, help filter stormwater, and provide habitat for wildlife. In 2014 we successfully fought to regulate excessive tree removal by Connecticut utilities by requiring DEEP to review the utility companies’ tree removal plans, mandating written consent from property owners to trim or remove a tree entirely on private property, and providing a fair process for homeowners who object. Two years later we worked to give the original law teeth by establishing fines for utilities that don’t comply with the law when cutting trees on municipal property.

Making Connecticut a Climate Leader and Cleaning Your Air

In 2008, Save the Sound worked with state legislators and a coalition of organizations and committed citizens to make Connecticut a national leader by passing the flagship policy of Connecticut’s climate plan. The law requires the state to reduce its total greenhouse gas emissions to at least 10 percent below 1990 levels by 2020, and to at least 80 percent below 2001 levels by 2050. It set an example for state and federal governments and positioned us an early leader in the global clean energy economy. Sadly, Connecticut is now lagging behind its neighbors, and lawmakers’ reluctance to move forward threatens regional momentum on greenhouse gas reductions and renewable technology adoption. Emissions have actually increased since 2012, putting Connecticut at risk of violating the 2020 goal. However, we’re working to put the state back on track—stay tuned.

As natural gas infrastructure continues to expand, it’s essential to prevent unnecessary greenhouse emissions from leaky pipes and equipment—especially those that cost ratepayers money for gas that never even reaches their homes. In 2014 we drafted and got passed a law to save consumers money and protect our climate from methane gas emissions.

In 2004, Save the Sound’s leadership in the Clean Cars Alliance helped bring California’s strict vehicle emissions standards to Connecticut. A few years later, we supported creation of a program to label automobiles with an emissions score so car buyers can choose a model that’s right for them and right for the environment. More recently, we’ve worked to make it easier to buy zero-emission and electric vehicles, and improve the state’s charging and electric grid infrastructure. That’s why in 2016 we worked to pass a comprehensive electric vehicles law that lays the groundwork for slashing the transportation pollution responsible for 40 percent of Connecticut’s greenhouse gas emissions.

How to Keep Winning

Successes like these take thousands of voices fighting for the environment at our state capitols. Join your friends and neighbors in helping us pass good environmental laws and stop bad ones: sign up to receive our action alerts. To learn more about our legislative efforts and victories, click here for our current Connecticut legislative agenda, or read outcomes from past years.

August 2022 – October 2022
This year marks our 20th year of hosting cleanups across Connecticut as part of the International Coastal Cleanup (ICC). Join us in this effort by registering to cleanup our beaches, rivers, parks, and natural spaces.