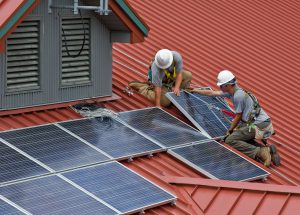 Slashing air pollution and slowing climate change are possible—if we end our dependence on fossil fuels and instead build a clean energy future.

Renewable energy sources such as wind and solar have zero fuel costs, which can save families money on their energy bills. Generating power locally creates jobs in emerging industries. And clean energy cuts pollution that worsens asthma and heart disease. Save the Sound works to bring all these benefits to our communities.

How does Connecticut rank as a clean energy leader? The Union of Concerned Scientists finds there’s good news—and bad news.

So how do we ramp up renewable technologies?

Save the Sound advocates at the state legislature, Department of Energy and Environmental Protection, and Public Utilities Regulatory Authority for policies that encourage investments in renewable energy. Locally-generated, self-replenishing power is the solution to Connecticut’s high and volatile electricity prices, and will bring more reliable, healthier energy to the state.

Sustainable, offshore wind development is a better option than putting our coast and wildlife at risk by drilling on the Atlantic continental shelf. In addition to generating clean energy, offshore wind generates clean energy and also brings jobs and economic growth to port communities. In parts of Connecticut, carefully-sited onshore windmills are a viable solution, and windmill designs are growing ever quieter and more wildlife-friendly. Connecticut has now committed to sourcing more of its energy from offshore wind and in 2019 accepted a bid for 804-megawatts, roughly 14% of the state’s power needs.

Modernizing the power grid to support more widely-distributed electricity generation and effectively storing energy from intermittent sources like wind are key to successfully transition to a renewable-based electric grid.

The Connecticut Green Bank’s energy efficiency and renewable energy generation programs, supported by the Clean Energy Fund, are the smartest investment the state could make. In 2017, the Green Bank leveraged $6 in private capital investment for every $1 of public money invested in its programs. Save the Sound works to protect these funds from state budget raids to ensure solar programs can proliferate in Connecticut.

Your support makes our work to transition Connecticut to a clean energy economy possible.

Thursday, Aug. 18 at Noon, Webinar
Cleanups 101: How to Participate & How to Lead - Interested in hosting a cleanup but don't know how to get started? Join us as we discuss how to inspire your local community to get involved in waterway cleanups, review cleanup captain responsibilities & resources, answer questions, and more.