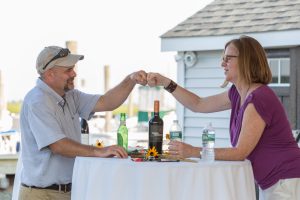 For 40 years, you have fueled our success. Save the Sound’s small staff of outstanding community organizers, engineers, lawyers, and communications experts create campaigns to save your region’s environmental treasures. But it is your public outcry, your local organizing, and your generous contributions that transform opportunities into victories.

Your passion and our expertise combined have resulted in:

Here’s a small sampling of how your support has protected the natural resources we all share:

Cleaning Up, Protecting, and Restoring the Sound and Your Rivers

Three decades ago, Long Island Sound was so polluted that fish were regularly dying and lobsters were crawling out of its waters. Hundreds of you heard our call and demanded action. After a quarter-century of advocacy, nitrogen pollution from over 40 sewer plants has been slashed. Your Sound’s waters are clearer and its web of life shows marked signs of recovery.

When Shell Oil threatened to build the Broadwater gas facility right in the middle of Long Island Sound, you stepped up, adding your voice to the opposition as our attorneys fought the proposal at the federal level. Together, we beat back that scheme.

Thousands of you have joined us in restoring your rivers and coast. At Rocky Neck State Park, you planted dunes by the creek our engineers re-opened—and a quarter-million more fish now swim up that creek to reach breeding grounds. You re-planted marshes on Long Island and built over two dozen rain gardens that filter polluted stormwater and reduce urban flooding. And every fall you join us to clean up your favorite beach—picking up over 100,000 pounds of trash since 2009.

Our volunteer-based water monitoring program and intensive research documented outrageous levels of sewage spills and leaks along the Westchester coast and in the City of Danbury. After polite negotiations failed, our lawyers brought Clean Water Act cases on your behalf in Federal Court. With your backing, the battle continues.

Protecting Your Forests and Favorite Places for Future Generations

For a quarter-century we have led legal fights and public campaigns to save great places in Connecticut and New York from the bulldozer.

Whether it’s forming a massive grassroots coalition to protect 15,000 acres of Kelda land in central and western Connecticut and strengthen laws that protect another 120,000 acres of water company lands, successfully saving the 1,000-acre Preserve forest once slated for development, or winning protections for trees in your neighborhood, our expertise in alliance-building and environmental law get the job done.

We’re now bringing that expertise to bear on protecting threatened Plum Island in New York and the Oswegatchie Hills in Connecticut. You’re the key to why we have won every big land protection battle to date, and why we’ll win these ones, too.

Making Connecticut a Climate Leader and Cleaning Your Air

With the federal government in retreat, states and cities must lead the battle to fight climate change and clean up our air. Save the Sound knows how. We led the charge in 2004 when Connecticut joined California’s clean car standards. Four years later, you joined in as we spearheaded a grassroots campaign that passed Connecticut’s powerful state Global Warming Solutions Act. Now Save the Sound sits on the Governor’s Council on Climate Change, pushing to meet those climate goals.

We’ve brought innovation to Connecticut, co-founding the Stamford 2030 district for business leaders to share best practices for reducing energy use. Our leadership of the Transit for CT Coalition brought together environmentalists, labor unions, advocates for low-income families, and citizens like you to push for affordable, low-emission public transit.

Our lawyers, who have fought and stopped gas power plants, are now taking on the federal government to battle a Pennsylvania coal plant that threatens the air your family breathes.

Be a part of the victories still to come. Join us as a member, volunteer, or activist today.