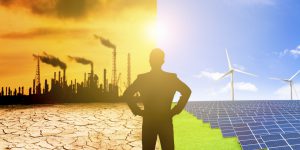 We’re living in a time of climate destabilization: historic heat waves and droughts, bizarre cold snaps that disrupt farming, and massive hurricanes that produce destructive flooding and drive people from their homes. Despite these recurring crises, our federal government appointed an EPA administrator with the explicit mission of dismantling policies and programs instituted to reduce fossil fuel use and build a renewable and sustainable future. We are waging legal battles to halt this anti-climate agenda and fighting ill-advised pollution-producing projects at the local level.

Connecticut electric customers pay into state funds for energy efficiency and clean energy programs—programs intended to save money for families, clean the air we breathe, and spur economic growth. But in October 2017 , the state government unconstitutionally diverted $155 million of those ratepayer funds to plug an unrelated budget gap.

That’s why on May 15, 2018 we filed a federal lawsuit against the State of Connecticut demanding the funds’ return. Our co-plaintiffs and partners in this fight include Leticia Colon and Efficiency for All, clean energy trade group Solar Connecticut, consumer rights groups Fight the Hike and CCAG, and additional efficiency and solar businesses.

Despite the active lawsuit, the money was formally transferred into the general fund on June 25, 2018. We continued to press the case on an expedited schedule through summer 2018. In October the judge ruled against ratepayers and affected businesses, but we came back with an appeal in November and intend to continue fighting to get funding restored and ensure this doesn’t happen again.

Read the Memo of Law brief here, and our response to the state’s brief.

See an overview of the case, or read the full complaint here.

Read coverage in the Hartford Courant and Courthouse News.

Connecticut v Pruitt (Federal Court for the District of Connecticut)

In May 2017, Connecticut filed a lawsuit in the United States District Court against the EPA for failure to take timely action on a petition to stop pollution from a Pennsylvania coal-fired power plant that blows into New York, Connecticut, and New England. CFE intervened as a party to the action, both on behalf of itself and as local counsel to Sierra Club.

In February 2018 we got a federal court order requiring the EPA to hold a hearing to determine whether the plant should install controls. After that ruling, in a separate proceeding in Pennsylvania, the plant agreed not to burn coal in certain seasons starting in 2028. We did not participate in this separate agreement and supported the Attorney General and DEEP as they argued for stronger controls in a public hearing in D.C.

NTE Connecticut, LLC has returned with another application requesting a certificate to build a gas-fired power plant in Killingly, a low-income community already plagued by power plant pollution. We successfully challenged NTE’s prior application, which was denied by the Siting Council. NTE’s new application is backed by an obligation granted in the ISO-NE forward capacity auction (FCA 13), but that is not determinative before the Siting Council. The plant is unneeded and construction of the generating facility and associated natural gas pipeline would cause substantial environmental damage. New natural gas is contrary to Connecticut’s laudable climate goals and would lock the state into decades of dirty fossil fuel consumption, stifling the state’s transition towards a renewable energy economy. You can find an article about the power plant here.

How We Use Environmental Law

The Role of Environmental Justice

Our Climate and Air Programs

Monday, May 23, 5:30 p.m.
Dana Dam Site Walk - Please join us for a site visit led by our project team, who will talk about plans for removing the 90-foot-long dam and restoring a portion of the River to a natural meandering path instead of its current straight line along the adjacent Metro North Railroad tracks.