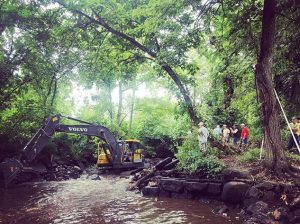 Successes you can see and touch are special—they’re what make an immediate difference for the rivers and landscapes you love, and fuel our commitment to long-term battles. Here are just a few of the on-the-ground victories our Ecological Restoration team has achieved by bringing together engineering, fisheries expertise, and dedicated volunteers!

Until the 1970s, around 250,000 alewife traveled upstream through Bride Brook in East Lyme each year. But narrow culverts that restricted tidal flow to the upstream marsh dropped that number to 80,000.

The following year, the alewife run more than doubled and in 2017, 386,000 alewives passed through Bride Brook. This means more forage fish to sustain game fish like stripers and bluefish. Restoring active tidal flow to the marsh also improved water quality, plant health, and conditions for birds, and the revitalized environment has increased tourism.

Bringing life back to the Quinnipiac River

The Harry Haakonsen fishway, installed by Save the Sound at Wallace Dam on the Quinnipiac River in Wallingford, Connecticut, in 2012, opened 17.3 miles of river and 171 acres of lake and pond habitat to American shad and river herring.

Four years later, Save the Sound built on that success by removing two dams from the upper Quinnipiac River in Meriden and Southington, freeing many more miles of river. Fish can now reach their spawning grounds for the first time in more than a century and surrounding communities aren’t at risk of flood from decrepit dams. The upper Quinnipiac is now accessible for humans to enjoy fishing and boating—and observe the power of an ecosystem as it heals.

Long Island’s 1,300-acre Sunken Meadow State Park is enjoyed by two million visitors each year, and home to 80 acres of salt marsh and 55 acres of tidal creek and marsh, as well as coastal forest, dunes, and beach. Sunken Meadow Creek connected this marsh habitat with the Nissequogue River estuary and Long Island Sound, until the Army Corps of Engineers built an earthen dike across the creek in the 1950s.

Superstorm Sandy breached the dike and reconnected the creek. The benefits of restored tidal flow were immediate, as healthy, native smooth cordgrass (Spartina alterniflora) started to replace invasive common reed (Phragmites australis). Save the Sound is accelerating the natural recovery by bringing together volunteers to plant native marsh plants and prevent stormwater runoff from the park’s parking lots. The free-flowing tidal creek and healthy salt marsh are already attracting a diversity of fish and migratory birds.

West River and Its Watershed

In the 1920s, New Haven installed tide gates that let fresh water flow downstream but restricted incoming tides, drastically changing the West River watershed’s habitat and wildlife. In 2009, Save the Sound replaced three of the old gates with self-regulating ones that allow tidal flow and are helping reestablish species diversity on more than 80 acres of tidal marsh and seven miles of river. We’ve since removed the Pond Lily Dam upstream. This significantly reduced flood risk, restored fish access to 2.6 stream miles and 76 acres of Konold’s Pond, and improved habitat for herring, eel, and shad.

We continue to work with the six watershed communities to rebuild the West River’s ecosystem in a coordinated fashion that includes building rain gardens and bioswales to collect and filter stormwater runoff from New Haven’s streets.

For nearly 300 years, the Hyde Pond Dam blocked fish migration, degraded water quality, and aggravated flooding along Whitford Brook in Mystic, Connecticut. The pond filled with sediment and the dam fell into disrepair. The 2016 removal of the Hyde Pond Dam re-opened 4.1 miles of stream habitat to alewife, blueback herring, and American eel.

Our project design used an approach unique to dam removal in Connecticut: natural channel evolution. Rather than forcing the newly free-flowing stream into an engineered channel, it was allowed to carve its own way through former pond sediments.

Once the channel settled, volunteers planted the new riverbank to control erosion and provide food and shelter for wildlife. The variations of a restored floodplain will revitalize the local ecosystem and keep neighbors safer from flooding. See a timelapse video of the dam removal here.

See more projects and be a part of restoration success stories: volunteer for a planting!