Find out how your Long Island Sound beaches fared

Save the Sound released results of its “Long Island Sound Beach Report” on August 2. The report highlighted the “Top 20” beaches on Long Island Sound based on water quality, and, for the first time, presented comprehensive grades for 204 swimming beaches in New York and Connecticut. The report detailed safe swimming conditions at numerous beaches, but noted that continued rain-triggered water pollution is a harbinger of future challenges.

Get your copy of the latest Beach Report

Save the Sound also unveiled an upgraded website dedicated to providing public access to over a decade of water quality data for Sound beaches, at www.SoundHealthExplorer.org. 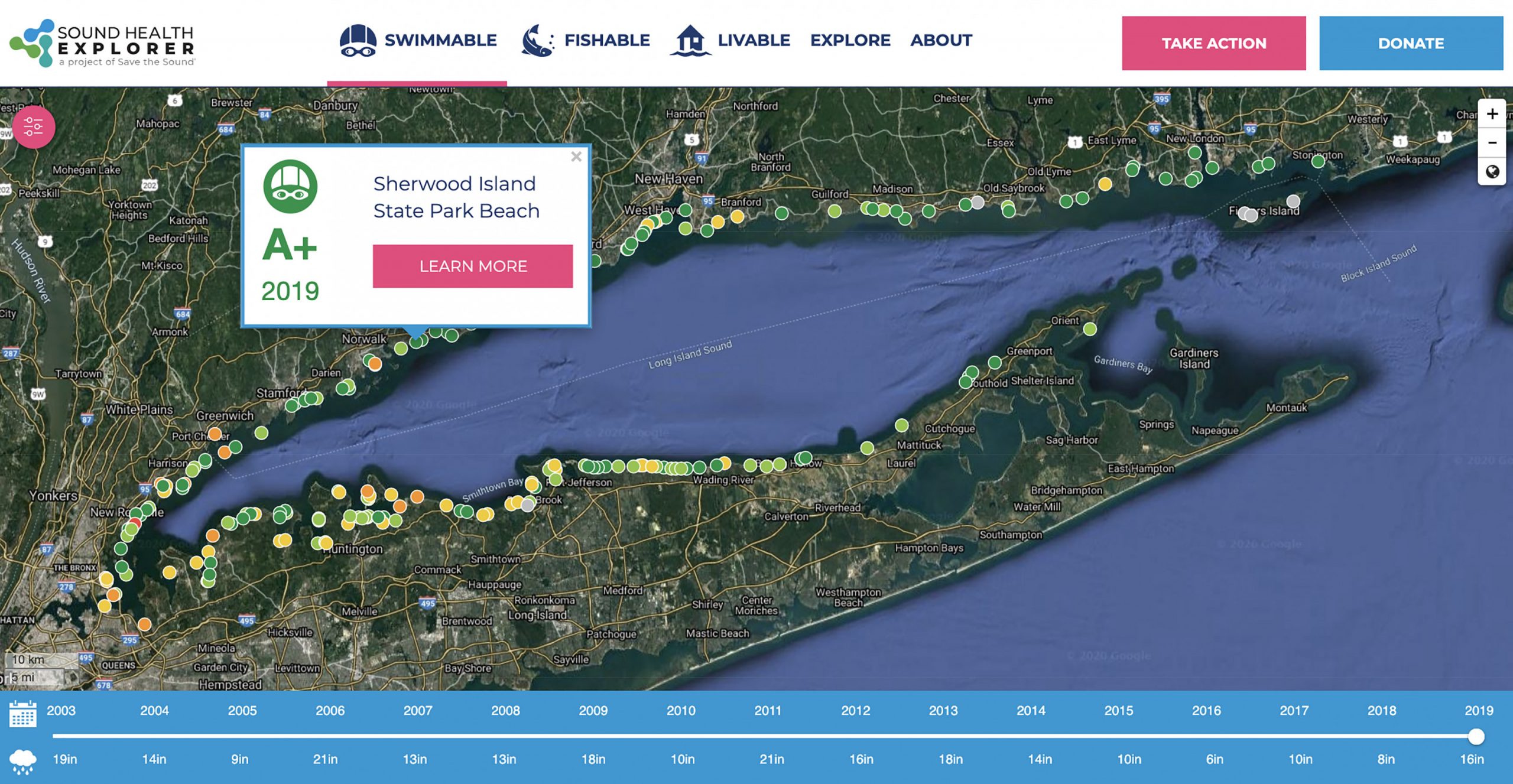 Save the Sound’s LIS Beach Report offered good news for swimmers and beachgoers, highlighting dozens of beaches on both sides of the Sound that consistently earn top grades for water quality. On average, Long Island Sound beaches met safe-swimming criteria 93.3% of the time in 2016-2018. In Connecticut, the Surf Club Beach in Madison was ranked #1, followed by beaches in New Haven, New London, and Fairfield Counties. New York’s top beach for 2016-2018 was the Rye Town Beach (also known as Oakland Beach), in Rye, followed by numerous beaches in Suffolk County, and Westchester County’s Rye Playland Beach. New York City residents will be pleased to know that popular Orchard Beach in the Bronx earned top honors, ranking #9 in the New York Top 10. Top beaches included:

*these five beaches have limited access for local residents only

The report, which analyzed trends from the most recent three years tested (2016-2018), also revealed some troubling findings. For the three summers covered in the report, the overall failure rate of beach samples more than doubled in wet weather—jumping from 4.9% in dry weather to 14.4% following wet weather. As a result of climate change, the Sound region is expected to experience steadily increasing rainfall over the coming decades which means more needs to be done to improve coastal stormwater management and sewage infrastructure. 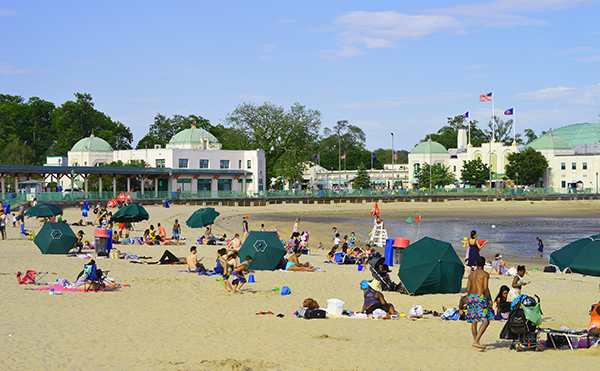 High rainfall impacts water quality at beaches in a number of ways, including by diverting untreated sewage directly into the Sound in locations which use combined stormwater and sewer pipes, or those locations with decaying and damaged pipes. With increased rainfall levels leading to added beach closure days, even in the sunny days following heavy rain, Save the Sound is urging communities to invest in improved sewer treatment and handling capacity, as well as to increase testing at impacted beaches. Save the Sound has successfully lobbied for state funding in both Connecticut and New York to assist municipalities in upgrading their wastewater and stormwater infrastructure.

Tracy Brown, director of Save the Sound, commented, “Long Island Sound beaches are an integral part of the lives of millions of beachgoers each year. We’re pleased to see so many beaches testing water quality regularly and offering public access for swimmers and beachgoers to enjoy the Sound safely. At the same time, we know that beaches practically next door to one another can have vastly different water quality, especially if local stormwater and sewer lines are combined or are in poor condition. Our upgraded SoundHealthExplorer.org website is an extremely useful tool for regulators, local leaders, and residents to identify water quality trends at individual beaches.” 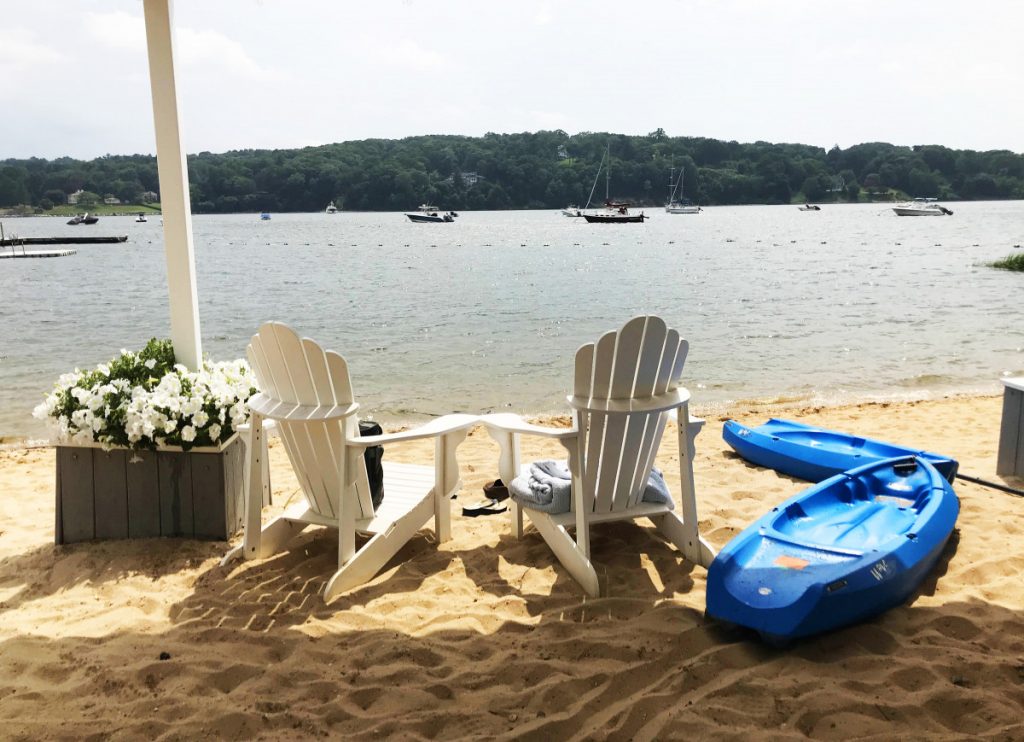 Gregory O’Mullan, an environmental microbiologist and professor at Queens College who consulted with Save the Sound on this report, stated that “The Sound Health Explorer website and this newly released report are important tools that can help the public and elected officials to become more informed about water quality and actions they can take to improve conditions at our local beaches. These data help to identify locations where environmental quality consistently supports safe recreation and locations where major improvements are needed to achieve that goal.”

Save the Sound’s 2019 Beach Report utilizes the Sound Health Explorer website to compile and analyze data from federal water quality databases. The EPA administers a grant program that assists states and coastal areas in paying for beach monitoring and public notification through an amendment to the Clean Water Act, called The BEACH Act. The BEACH Act directs local health departments to monitor water quality weekly at swimming beaches and posts results to the EPA database. 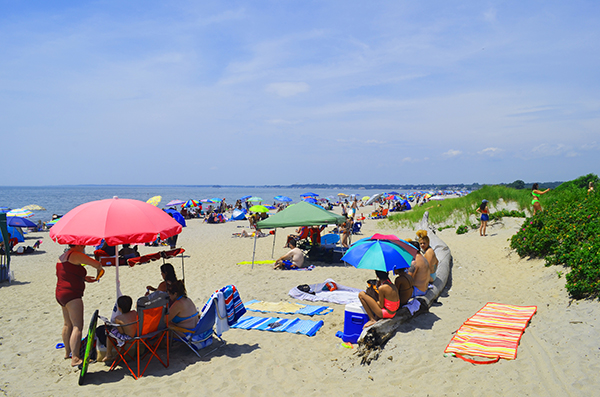 The Beach Report also assigned regional grades for each year from 2009 to 2018. Overall, there is a pattern of higher grades in the eastern Sound and lower grades to the western Sound. However, this east–west gradient is not constant in every year, showing that all regions have opportunities for improvement.

The maximum magnitude (concentration of fecal bacteria) of failure also differed by region. In the Westchester/NYC region, where Combined Sewer Overflows (CSOs) and urban surfaces deliver concentrated pollution during rain events, the maximum magnitude at beaches averaged more than one and a half times higher during wet weather. In Connecticut and Suffolk County, where onsite sewage treatment and animal sources are more prevalent and can reach the water independently of weather, the magnitudes of contamination were often highest in dry weather.

Residents, as well as local and regional officials, are urged to check www.soundhealthexplorer.org for data regarding specific beaches. Often, issues forcing beaches into frequent closures can be addressed when local water quality patterns are carefully assessed and associated pollution sources identified.

More on Sources and Solutions for Fecal Bacteria Contamination at Beaches