During the late 18th and early 19th century, dams were installed along the upper reaches of the Quinnipiac River and several of its tributaries to provide power for the budding industrial activity in the region. The Clark Brothers Dam in Southington and Carpenters Dam in Meriden were among many built to harness the power of the river. As the energy needs of the mills and factories expanded, water power was supplemented, and eventually replaced, by steam power. By the mid-20th century, these two dams had been abandoned.

Barriers like Carpenters Dam and the Clark Brothers Dam prevent migratory fish from traveling between freshwater and the ocean – limiting their ability to seek out food and reproduce. These barriers also block the flow of sediment, leading to lower water quality, and can increase the risk of flooding for the surrounding area.

In 1984, 11 acres within the Quinnipiac River Basin were designated a Superfund site – a title assigned by the U.S. Environmental Protection Agency to areas polluted by hazardous contaminants causing significant environmental emergencies. The removal of the Clark Brothers Dam and Carpenters Dam were identified as high-impact projects that would help remediate and restore the health of the Quinnipiac River. 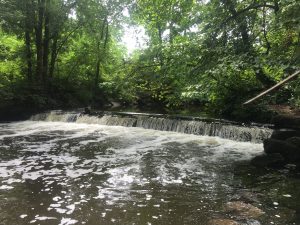 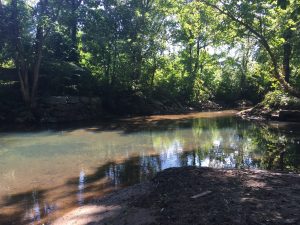 Founded in 1854 by brothers William, Henry, and Charles Clark, the Clark Brothers Bolt Company was an important producer of carriage bolts, as well as screws, nuts, washers, and other fasteners. The company installed a dam adjacent to the original factory along what is now Route 10 in Southington, which provided hydroelectric power to the factory until it transitioned to more efficient steam power. The original factory burned down in 1893, and the newly constructed facility on Canal Street left the dam abandoned until it was removed in 2016 by Save the Sound, in partnership with the Town of Southington. 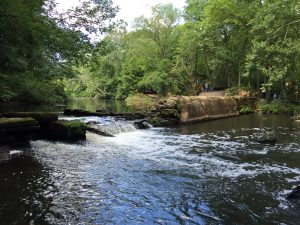 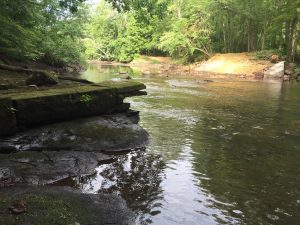 Carpenters Dam powered a small complex of mills known as Hough’s Mill, which was operating on the banks of the Quinnipiac River by 1776. Located near what is now the border of Meriden and Cheshire, the site was originally a grist mill – though eventually it cycled through several uses before becoming a stone grinding and polishing factory. The original wooden crib dam was encased in concrete in the early 1900’s, but was abandoned following the 1934 sale of the property to the City of Meriden. It remained a barrier to fish migration, recreation, and the flow of sediment until the city partnered with Save the Sound to demolish and remove it. During removal, some of the original wooden beams were salvaged, turned into furniture, and auctioned off in partnership with City Bench. 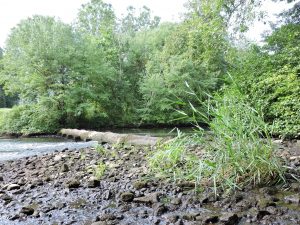 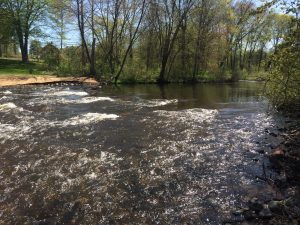 For the past 100 years, a main water pipe for the City of Meriden crossed over the Quinnipiac River at a point just upstream of Carpenters Dam. Measuring 30″ in diameter, the pipe was a significant barrier to fish migration and the recreational enjoyment of the river. After a new water pipe was installed, the old pipe remained until Save the Sound partnered with the City of Meriden to remove it in 2019.

The removal of these three barriers re-opened 16 miles of the river to migratory fish. Taken together with prior work, this means that Alewives, American Shad, Striped Bass, and more can once again access historic spawning grounds along 36 of the 38 miles of the Quinnipiac River.