Your health depends on pure, clean drinking water. And nothing protects drinking water like the forests that buffer and filter our reservoirs and the rivers and streams that flow into them. However, ill-planned developments frequently threaten drinking water lands and water quality. 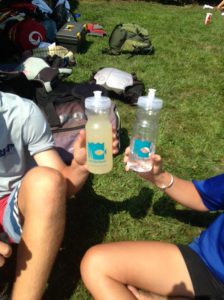 Save the Sound and its Endangered Lands Coalition have drafted and helped pass laws protecting more than 100,000 acres of water company lands that surround Connecticut’s drinking water reservoirs. However, another quarter-million acres of privately owned, unprotected forest that purifies these streams, rivers, and reservoirs are increasingly threatened by development.

In 2007, Save the Sound (then Connecticut Fund for the Environment) worked to pass Public Act 07-252, which clarifies that water companies can sell land to towns, the state, or land trusts for conservation without having to go to public auction, protecting this land from cash-rich developers and shielding your drinking water from contamination.

Save the Sound has successfully fought off projects that threaten drinking water lands. One recent example was the Kinder Morgan Pipeline, which sought to build a fracked gas pipeline across lands that protect drinking water and provide some of the most popular recreational trails in Connecticut. Thanks to massive public outcry from watchful residents like you, helpful legal rulings in Massachusetts, and our efforts, the company withdrew its proposal in summer 2016.

Over the years we’ve held back multiple damaging proposals by gravel company Tilcon Connecticut. The City of New Britain and Tilcon recently revived a 2007 deal that would let the company mine on city-owned, Class I drinking water lands—which are supposed to be protected under state law—for the next 40 years. Once the new gravel quarry is exhausted, New Britain would have a new “reservoir”—a massive hole filled, over time, by rainwater and surrounded by acres of land degraded by mining activity. We fought back a proposal at the state legislature but we expect Tilcon will be back…and we’ll be ready.

During the Northeast Utilities – NSTAR merger, Save the Sound worked to protect 9,500 acres of valuable open space owned by NU in 90 municipalities. NU agreed to transfer 1,000 acres of open space, including King’s Island (Enfield/Suffield), Skiff Mountain (Sharon), Hanover Road (Newtown), and Barlett Road (Waterford), into a preservation land trust. They agreed to give the towns or local land trusts the option to buy the remaining 8,500 acres if and when the company wishes to sell.

Previously, in the Northeast Utilities and Con Edison proposed merger, Save the Sound and allies got nearly 375 parcels of land with high recreation or natural resource value placed on a Conservation List. This gives towns and land trusts the first opportunity to purchase these parcels for open space conservation and recreation.

How you can protect drinking water lands

August 2022 – October 2022
This year marks our 20th year of hosting cleanups across Connecticut as part of the International Coastal Cleanup (ICC). Join us in this effort by registering to cleanup our beaches, rivers, parks, and natural spaces.