New Haven, Conn. – Thanks to the removal of two dams in Southington and Meriden this month, migratory fish like American shad and river herring will soon be able to swim into the upper reaches of the Quinnipiac River—for the first time in a century and a half. 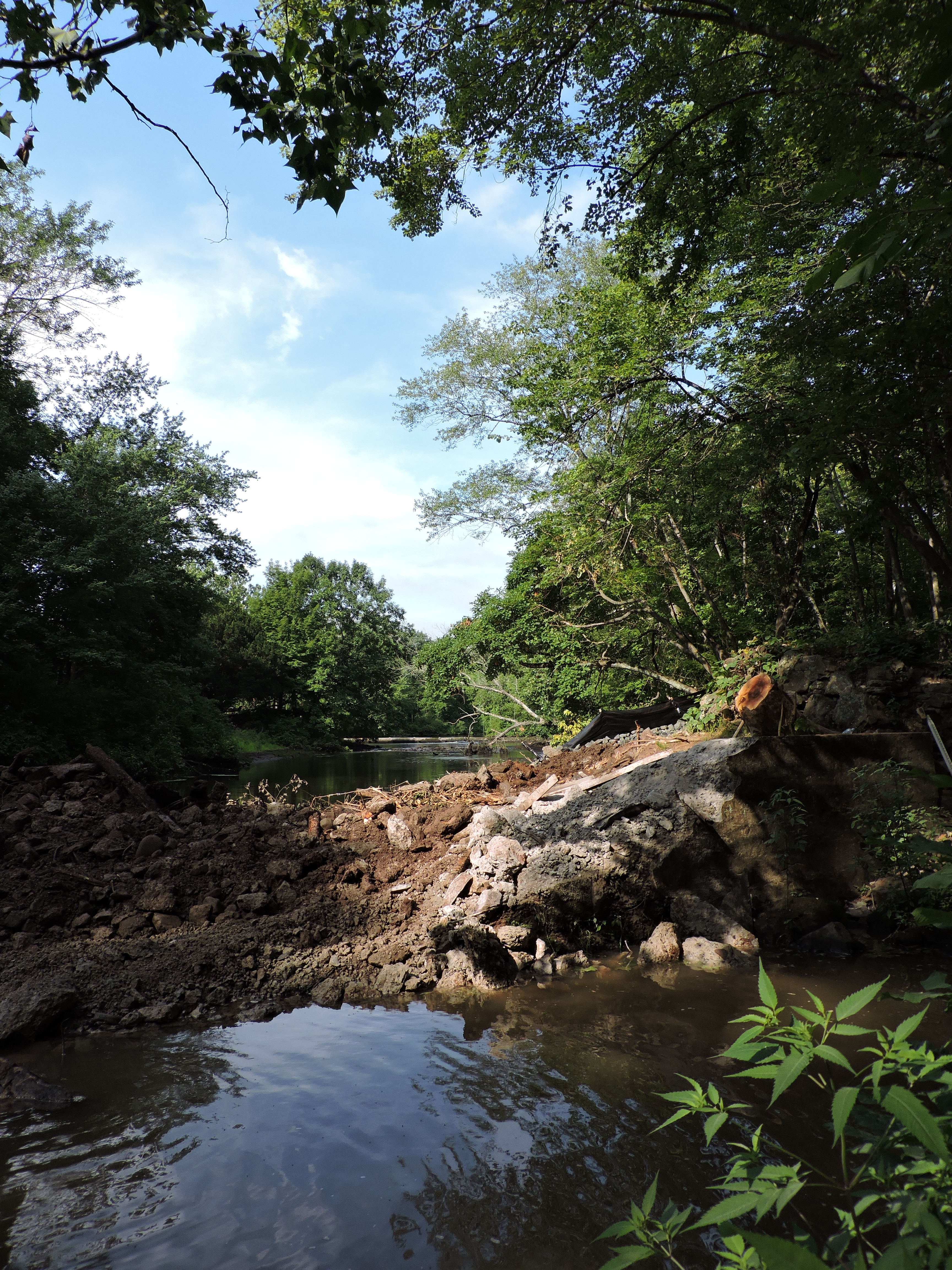 Connecticut Fund for the Environment and its bi-state program Save the Sound (CFE/Save the Sound), the U.S. Fish and Wildlife Service (Service), and the Connecticut Department of Energy and Environmental Protection (DEEP) are partnering with the Town of Southington and the City of Meriden to take down two dams on the Upper Quinnipiac River. Clark Brothers Dam, adjacent to Apple Valley Bowl off of Route 10 in Southington, was removed on August 2. Work to take down Carpenters Dam, located off of Sindall Road in Meriden near the start of the City’s Linear Trail, began on August 15.

CFE/Save the Sound, DEEP, and the Service also plan to remove an inactive water line that crosses the river in Cheshire within the next year, which will make the river safer for kayakers and canoeists. Two dams downstream already have fishways that allow migratory fish to travel from Long Island Sound into the Quinnipiac.

“Opening up the Upper Quinnipiac is a big step in our campaign for free and clean rivers,” said Gwen Macdonald, director of habitat restoration at CFE/Save the Sound. “Free-flowing rivers open up the habitat needed to bring back an abundance of fish and wildlife to Long Island Sound and our rivers. Over the last decade, we’ve partnered with federal, state, and local governments and hundreds of volunteers to restore 80 miles of river around the Sound so herring, shad, and eels can reach their native breeding grounds. And free rivers are safe rivers—when an old, decrepit dam comes down, surrounding communities aren’t as threatened by flooding and families can enjoy kayaking and wading.”

Over the last year, the Service and CFE/Save the Sound have partnered to remove additional dams in New Haven and Mystic. “Restoring rivers and wetlands is a high priority for the U.S. Fish and Wildlife Service; and we are working with partners like CFE/Save the Sound throughout New England to remove dams, replace culverts, reforest floodplains, and restore tidal and freshwater wetlands,” says Tom Chapman, project leader for the U.S. Fish and Wildlife Service New England Field Office. “These types of projects, when implemented strategically and thoughtfully, improve the health of our watersheds, the health of fish and wildlife populations, and also restore recreational opportunities for the public.”

According to a recent region-wide assessment, New England has one of the highest concentrations of dams in the country: Connecticut alone has approximately 4,000 dams. Many no longer provide any economic benefit, while requiring costly maintenance and causing environmental damage. Not only do dams prevent fish from moving upstream, they can also stop natural sediment from moving downstream to replenish estuaries and beaches, and can pose flooding risks to local communities during big storms.

“These migratory fish were once very abundant and an important resource to early residents of Connecticut,” said Steve Gephard, a fisheries biologist with the DEEP’s Inland Fisheries Division. “The construction of dams decimated the runs because they blocked access to critical habitat.  The DEEP seeks to restore access to this habitat and repopulate the runs when possible and has targeted the Quinnipiac River.  CFE/Save the Sound’s removal of these two dams is a huge step forward toward our jointly-held goals.”

Funds for the removal of Clark Brothers and Carpenters dams come from natural resource damage settlements associated with the Solvents Recovery Service and Old Southington Landfill Superfund sites, both located in Southington, CT. Hazardous waste including volatile organic compounds (VOCs), polychlorinated biphenyls (PCBs), and metals, as well as remedial activities required to clean up the sites, damaged and destroyed wetlands and injured the Quinnipiac River. The contamination reduced the quality and availability of foraging habitat for birds and fish, and rendered millions of gallons of water in the Quinnipiac River watershed undrinkable.

The EPA initiated a five-year legal battle, which CFE/Save the Sound joined, against the polluters. In settlements with the responsible parties, the Service received approximately $800,000 to restore impacted natural resources. Additional funding through the Quinnipiac River Groundwater Natural Resources Damages Fund supported CFE/Save the Sound’s building of rain gardens and other green infrastructure to replenish aquifers in the watershed with clean rainwater.

The Service and communities in the Quinnipiac River watershed identified removal of Clark Brothers and Carpenters Dams as a top priority project in a 2013 restoration plan. The successful removal of these two dams marks a key moment in efforts to restore the Quinnipiac River to ecological health and to re-open rivers across Connecticut to fish migration.