Thanks to widespread public concern raised about the U.S. Army Corps of Engineers (“the Corps”) proposed projects to address storm surges in the NY/NJ Harbor, as well as lobbying by Save the Sound and our allies, a waiver has been granted to increase the schedule and funding for the Corps’ “NY/NJ Harbor and Tributaries Study (NY&NJHATS)” which is developing those proposals. This decision allows the Corps to increase the previously approved funding ceiling of $6M to $19.4M and to extend the study schedule from 3 years to 6 years, with a completion date of 2022. It allows for an additional 15 months for more comprehensive studies of the proposed alternatives.

The Corps stated, “this waiver was requested and approved in light of the complexity of comprehensive coastal storm risk options for the highly urbanized NYC area, combined with tremendous public engagement and comments on the initial conceptual alternatives under consideration in the study.”

A new “Interim Report” has been added to the schedule to provide the public with more information, including answers to the thousands of public comments that were submitted in November. The Interim Report is scheduled to be released on February 19, 2019. We will post that report here, and provide our assessment of that report after a thorough review. Please sign up for our email list or check back on this page for the posting of public hearings that will take place in March and April 2019.

These proposals include massive storm barriers spanning the waterbodies that are the lifeblood of our region – across New York Harbor, Western Long Island Sound, and other bays and tributaries. These storm surge barriers could permanently alter the landscape and health of these waterbodies, while also not effectively confronting the suite of climate changes impacts that coastal communities will face.

Projects of this scale and potential environmental significance must be thoroughly evaluated, with robust participation by the public. All affected communities must have the opportunity to participate – including people throughout Long Island Sound. The study is currently in the National Environmental Policy Act (NEPA) scoping phase – take advantage of this opportunity to voice your concerns about this project and let Army Corps know what issues they must evaluate before moving forward.

The projects under consideration are a part of the New York – New Jersey Harbor and Tributaries Coastal Storm Risk Management Feasibility Study. The study area covers more than 2,150 square miles – but expected impacts of these projects extend even further. The alternatives include different combinations of storm barriers across waterbodies, and onshore measures such as sea walls and levees. Natural and nature-based measures that can contribute to community resiliency more broadly, as well as protect against flooding, unfortunately appear to be more of an afterthought to this proposal.

In-water storm surge barriers are unacceptable. The environmental and human harm they would cause cannot be justified. Storm barriers spanning across waterbodies, except for a few gates that would remain open during non-storm weather, would worsen water pollution by restricting tidal exchange of pollutants and sediment, impede fish migration, and result in unsafe congestion of all boat and ship traffic. The barriers could suffocate marine life by decreasing oxygen levels and increasing algae blooms due to pollutants that are no longer flushed. Sediment transport would similarly be affected.

These water bodies would be forever changed, in ways we cannot begin to understand. All of these impacts must be thoroughly examined, modeled, and reflected upon before this project proceeds.

There is no “silver bullet” solution to protecting our coastlines. Storm barriers do not address sea level rise, they only protect against storm surges. Further, the gates of these storm barriers will need to be closed more frequently – as the sea level rises, smaller and smaller storms will trigger their closure. There are solutions that can address both storm surge and sea level rise, without destroying our waterbodies. These include sea walls, living shorelines, reimagined land use, among others.

A fundamental question that must be asked is “who receives protections from these barriers, and who falls outside?” Not only are Long Island Sound communities “outside” of the barriers, and unprotected – but they also might suffer from unique harm caused by the barrier themselves. Alternatives 2 and 3A include a proposed storm barrier across Western Long Island Sound at Throgs Neck; and alternatives 3A, 3B, and 4 include proposed storm barrier across the Hutchinson River (“Pelham Barrier”). Barriers in Western Long Island Sound might aggravate the very harm they are trying to stop. Storm barriers, by their very purpose and design, deflect storm surge – preventing it from crossing the barrier. This storm surge must, therefore, go somewhere else.

Past studies have shown that a barrier located at Throgs Neck may increase the sea level during a tropical storm event an additional foot in areas “outside.” An additional foot on top of the flooding from the storm itself! A later report found that a barrier may increase sea level during a Category 4 hurricane an additional 2 feet, on top of the baseline surge of the storm. An additional foot or two of flooding can be exponentially harmful to coastal communities. These impacts must be modeled – we must know what these side effects will be and whose businesses and homes will be damaged – before plans are approved. If storm barriers are to be built, the project must account for this harm.

The NEPA scoping process has been insufficient overall. But Long Island Sound communities have been completely excluded from participation, leaving much of the region unaware and their voices unheard. There were no scoping meetings held on Long Island, in Westchester County, or in Connecticut. Further, the study area does not extend past the Connecticut border or past the City of Glen Cove on Long Island even though backwatering effects have been demonstrated beyond this point. Will the environmental analysis stop at these arbitrary boundaries as well?

Public participation for a project of this scale, investment, and consequence should not be shortchanged. Please speak out now and tell the Corps that communities “outside the wall” need a seat at the table and impact on our communities need to be a part of the analysis.

When we make significant investments in climate change adaptation, we need to do it right. Strangling our region’s waterways and harming communities outside the project area cannot be justified in the interest of a hugely expensive, temporary, and functionally limited project. Let’s take action to protect our communities – but let’s take a comprehensive and inclusive approach. 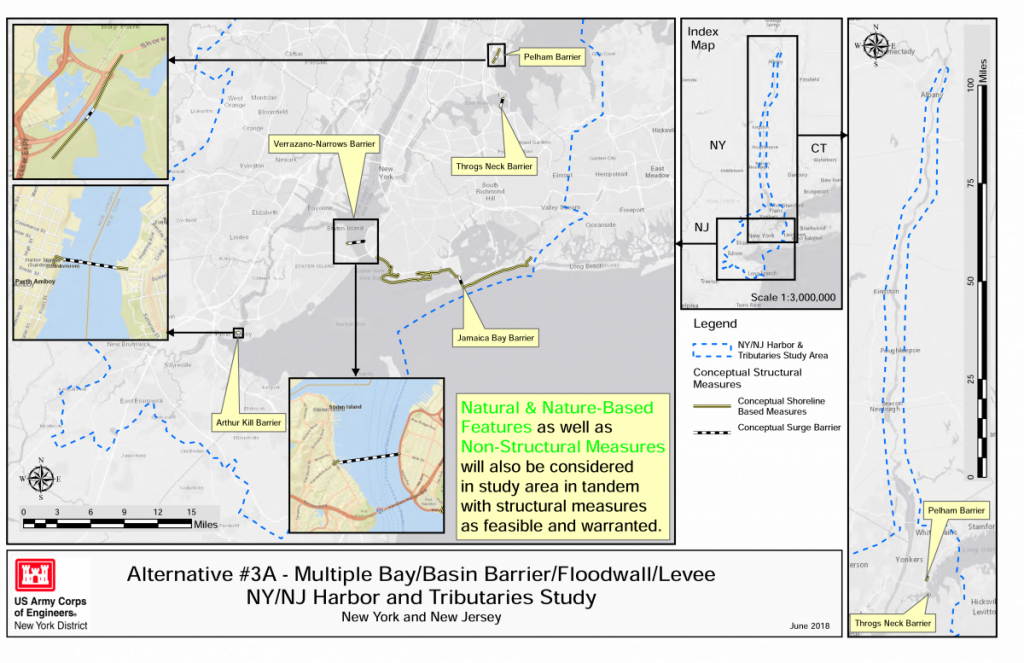