Business leaders, government, environmental groups, and other stakeholders begin process of envisioning next steps for Plum Island to find consensus as the federal government prepares it for sale

Riverhead, New York – Save the Sound and The Nature Conservancy launched a multi-month process with numerous stakeholders on Friday to develop a viable and broadly supported vision for the future of Plum Island.

Federally-owned Plum Island, located off Orient Point, Long Island, is slated to be sold at auction after the Plum Island Animal Disease Center moves to Kansas. The organizations brought together leaders from many fields to begin to identify future owners and future uses of the island as several allies in Congress have informally requested. [See what legislators have to say at the end of this release.]

“From the Town of Southold’s forward-thinking zoning of Plum Island for research and conservation, to our discussions about the island’s future with hundreds of people all over the region including our representatives in Congress, it became abundantly clear to us in the Preserve Plum Island Coalition that we need a detailed plan that addresses the whole island, said Louise Harrison, New York natural areas coordinator for Save the Sound. “By identifying beneficial outcomes through a careful planning process, we will be able to compile a wide range of ideas for the future of Plum Island. We are gratified by the great response from such a diverse group of people, all eager to work together for the benefit of this precious natural, cultural, and historic resource.” 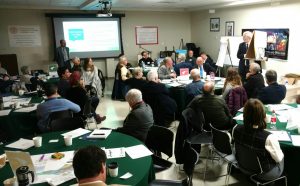 The first meeting, “Envision Plum Island,” was held Friday in Riverhead, New York, with more than 50 stakeholders, including elected and agency officials from local, tribal, state, and federal governments and representatives from academia, cultural institutions, historic preservation organizations, and the business sector, as well as ecological, parks management, and advocacy and civic organizations.

Supervisor of the Town of Southold Scott Russell addressed the crowd, emphasizing the importance of the professional research and planning that brought forward the bold zoning regulation for Plum Island, which would go into effect should the island be sold to a private entity. He said that “the Envision Plum Island forum is an important first step for developing practical and achievable goals that protect the future of Plum Island. By fostering a collaborative effort, I believe, we can create a vision for the island’s future that protects the national treasure that is Plum Island.”

The workshop included remarks about the island’s history, Army fort remains, and other cultural and historical features by Ruth Ann Bramson, co-author of An Island Unto Itself—The Remarkable History of Plum Island, New York, and presentations by the NYSDEC’s New York Natural Heritage Program. A consultant with expertise in the conversion of former military properties into refuges and open space made a presentation on the usual pathways of federal property disposals as well as the currently slated direct sale at auction. Additional meetings are planned, and The Nature Conservancy and Save the Sound will be seeking opportunities for the public to weigh in with their vision for Plum Island’s future.

Consulting firm Marstel-Day has been hired to help develop alternative scenarios, pathways, and proposed outcomes with the goals of permanent conservation, habitat protection, and integrated compatible reuse of the Plum Island’s existing infrastructure to maintain skilled jobs. The proposal will help inform strategies to achieve reuse of Plum Island that serves agreed-upon objectives.

“Plum Island offers unique habitat and important refuge for wildlife, and it has all the makings of a first-rate, low-impact, outdoor experience for visitors—who in turn will contribute to the local and regional economy,” said Marstel-Day President and CEO, Rebecca R. Rubin. “Ecological preservation of the majority of the island, coupled with a high-quality experience for visitors, is clearly its highest and best use. We look forward to guiding a broad range of regional conservation, cultural, government, and business interests through a process to identify pathways to a future that protects Plum Island’s unique environmental and historic riches.”

Plum Island is an 840-acre island in the eastern end of Long Island Sound that provides habitat for several federally endangered and threatened species of flora and fauna, including Piping Plover. The waters surrounding it provide fish for endangered roseate terns and are home to federally-listed marine species such as Atlantic hawksbill sea turtles, Kemps Ridley sea turtles, and Atlantic sturgeon. Seals haul out on its rocks, one of the largest such assemblages in southern New England.

In 2017, the U.S. House unanimously passed The Plum Island Preservation Act (H.R. 2182), which would require the Government Accountability Office (GAO) to submit to Congress a report on alternatives for the final disposition of Plum Island, New York, including transfer to another government or nonprofit entity for education, research, or conservation purposes. Connecticut’s and New York’s senators introduced S. 1737, The Plum Island Conservation Act, which would repeal the requirement directing the Administrator of General Services to sell the federal property and assets that support the Plum Island Animal Disease Center.

Additionally, there are two FY 2019 appropriations bills in play: one would defund the General Services Administration from marketing or sales activities, and the other would reinstate the normal land disposal process.

A shortlist of potential scenarios for the island will be developed in spring 2019 and compiled into a draft report that will be made available for public comment. A final report is expected in summer or fall 2019.

“Geological processes over thousands of years produced Plum Island and its remarkable biodiversity,” noted Executive Director Nancy Kelley, of The Nature Conservancy’s Long Island Chapter. “We are delighted that so many people want to spend a few months carefully considering what is the best use of the island for our region and the best way to bring that about.”

Generous support for the Plum Island visioning process comes in part from the John T. and Jane A. Wiederhold Foundation, Robert F. Schumann Foundation, and The Kitchings Family Foundation.

“Plum Island is home to pristine beaches, miles of natural shoreline, and critical habitats for hundreds of types of plants and animals. This environmental treasure must remain free from developers so it can instead be preserved for future generations. I will continue to will to push legislation to block any sale of the island and work to craft an alternative, long-term path to protect this precious resource. It is imperative that we stifle any sale and ensure any federal action truly advances conservation,” said U.S. Senator Richard Blumenthal (CT).

“Preserving Plum Island’s rich history and natural resources is a top priority of mine. It is home to hundreds of species of wildlife and numerous important historical sites. Auctioning it off to the highest bidder would be wrong and shortsighted and I will continue to fight in the U.S. Senate to prevent this from happening. I look forward to working towards this goal with ‘Envision Plum Island’ and learning what they think are the best options for future use of the land,” said U.S. Senator Chris Murphy (CT).

“Plum Island is beloved by our local community with 90% of the land undeveloped,” said Rep. Lee Zeldin (NY-1). “Plum Island offers our region a uniquely diverse wildlife and ecosystem and critical habitat for migratory birds, marine mammals, and rare plants. Plum Island is also an essential cultural and historical resource as well, with recorded history dating back to the 1700s. The current law, which mandates the sale of the island to the highest bidder, is the wrong path forward, because it does not provide for public access and permanent preservation of the island, or the continued use of the research infrastructure. The state of the art research facility at Plum Island must not go to waste, and preserving this island’s natural beauty while maintaining a research mission will continue to provide important economic and environmental benefits to Long Island.”

“Plum Island is an ecological, historical, and cultural treasure that, once lost, cannot be restored,” said Rep. Rosa DeLauro (CT-3). “That is why I am proud to have worked shoulder to shoulder with my colleagues in a bipartisan way to ensure the preservation of the island through House passage of the Plum Island Preservation Act. Going forward, I am committed to finding long-term, alternative options for the island instead of auctioning it off to the highest bidder.”

“Plum Island is a scenic and biological treasure, and should be preserved as a natural sanctuary—not sold off to the highest bidder for development. I was proud to work on a bipartisan basis to negotiate legislation that unanimously passed the House to require a new study of Plum Island, providing additional opportunity to further delay and restrict the final sale or transfer of property. For years, members from both sides of Long Island Sound have been working in a bipartisan manner to delay and, ultimately, repeal the mandated sale of this ecological treasure. I look forward to continuing our proven track record of success next Congress,” said Rep. Joe Courtney (CT-2).