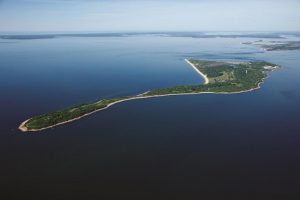 Plum Island is an ecological and historical centerpiece to the animals—including humans—and plants that depend on it. Even though the island is only 840 acres, it has a huge impact on marine and terrestrial wildlife because of its history of being mostly untouched by humans. The flora and fauna native to the island were able to grow and prosper without being subjected to habitat fragmentation, deforestation, and pollution that is seen everywhere else in the world. Saving Plum Island sale should be a priority for the government because of its huge impact on the Long Island Sound ecosystem and historical landmarks, such as Fort Terry.

Plum Island is a sanctuary to many endangered species including Roseate Terns, Piping Plovers, Kemp’s Ridley Sea Turtles, Porpoises, North Atlantic Right Whales, and Harbor and Grey Seals. Many of these animals rely on kelp beds for food and protection, and Plum Island may be the only place in New York where kelp beds are able to survive. In addition, Plum Island is one of the largest seal haul-out spots in New York. Several surveys have shown that over 600 seals can be seen on the rocky shores of Plum Island. In order to conserve these animals, their habitat has to be conserved too. Animals are not just the only ones that rely on Plum Island; seventeen rare plant species were found during the biodiversity survey. Two of these include the spring ladies-tresses and the whorled milkweed. It is extremely important to keep one of the only spots left relatively untouched by humans as sanctuary for these animals and plants.

Plum Island also had an integral part in the history of the United States. It held a key position for the military during the Revolutionary War, War of 1812, WWI, and WWII. Its role in both the Revolutionary War and the War of 1812 was to be a station for the British Army. Whoever took control of Plum Island was able to take advantage of the Sound because of its strategic position at the mouth. During WWI, Plum Island was a training station for cadets at Fort Terry, but no one stationed there actually saw a battle, even though they were on high alert for German U-boats. This was also the case for WWII because many of the able-bodied men were shipped off to other parts of the war. Most of the military personnel on the island during WWII were men with minor health problems and impaired physical ability. During peacetime, Plum Island also had an interesting connection with Prohibition and was associated with rum running. Today, it is the home of Homeland Security’s Animal Disease Center, which researches transboundary diseases (i.e., animal diseases that aren’t currently endemic in the US). It is essential to save this piece of American history and legacy in order to tell our history in the future.

There are 418 national park sites, including the 61 actual National Parks and other National Historic Sites, National Monuments, National Seashores, and National Recreation Areas. Plum Island is just as beautiful and important as these conserved areas of the country, so why not preserve it too? Plum Island should not be sold because citizens would lose a part of the Unites States’ history and animals and plants would lose their homes.

September - October
Connecticut Cleanup - Cleanup Sign up today as a volunteer for one of this year’s Connecticut Cleanups! Find your favorite beach in the list below, and we’ll follow up with details about how to connect with your beach’s Cleanup Captain on the day of the event.