On Thursday, October 7, we held Save the Sound’s Annual Meeting. The theme this year was “The Future of Environmentalism” with special keynote speaker Co-Founder and Executive Director of Intersectional Environmentalist Diandra Marizet Esparza.

Save the Sound Board Chair Todd Cort opened the meeting with remarks about the successes and challenges of the past year, highlighting the acceleration of environmental challenges, such as flooding events and droughts, and how that has impacted Save the Sound’s work. He turned attention quickly to you: Save the Sound’s dedicated members.

“I wanted to take my couple of minutes…to really highlight and emphasize how you have been a key to that success. Whether it’s supporting the organization, continuing your membership, volunteering, joining us for various webinars, writing to your legislators, taking an active part in your community—all of these things are incredibly valuable and necessary today and we really appreciate that.”

In his final remarks he spoke about the increasing awareness of “how environmentalism sits at and integrates with the communities and the people around us,” before introducing Esparza. 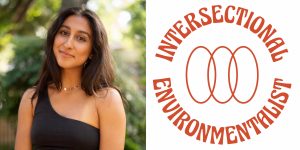 According to the Environmental Protection Agency, environmental justice will be achieved when everyone can “enjoy the same degree of protection from environmental and health hazards and equal access to the decision‐making process to have a healthy environment in which to live, learn, and work.”

Diving into the concept of intersectionality, Esparza spoke about Kimberlé Crenshaw, who developed intersectional theory after being inspired by the Combahee River Collective. Intersectional environmentalism identifies the ways that injustices affecting marginalized communities and the planet are so deeply connected, and brings them to the forefront of environmental activism.

“Something I like to take away from the concept of intersectional environmentalism is that when we disempower people from thriving, socially, economically, politically, regionally—you name it—we’re removing their ability to contribute to society as an incredibly important land steward, and everybody deserves a chance to thrive with the connectivity that our ancestors had with these lands even if it’s in new ways and it looks a little different as technology evolves,” said Esparza.

Tying it all together, Esparza said “environmental justice is our goal and intersectional environmentalism is our lens.”

“The connected nature of an intersectional environmentalism movement means that you don’t have to know it all because we have each other,” said Esparza in her closing remarks.

After Esparza, Save the Sound president Curt Johnson went over victories from the year and the current battles we’re fighting—from conserving Plum Island to advocating for the Transportation and Climate Initiative—before having a conversation with two new board members, Hamden city councilor and community organizer Justin Farmer and Executive Director at Junta for Progressive Action Bruni Pizarro, about intersectional environmentalism and Save the Sound’s accountability to the communities we serve.

“When we looked at our on-the-ground projects this year we realized that about a third of them are located within boundaries that either Connecticut or New York has identified as environmental justice communities,” said Johnson.

The meeting broke off into two breakout sections with Michaela Barratt from Radical Advocates for Cross-Cultural Education (RACCE) and Marissa Glaze from the Environmental Club at the Boys & Girls of Mount Vernon before ending with a slideshow of photos and highlights from the past year.

“In Their Own Words” Breakout Room: Michaela Barratt from Radical Advocates for Cross-Cultural Education

As a youth organizer with RACCE, Michaela Barratt has been working closely with Save the Sound to advocate for the Transportation and Climate Initiative (TCI) in Connecticut.

She spoke about how she first became passionate about racial justice in college after learning how our systems operate and perpetuate inequality, her work with the Waterbury public school system to advocate for cross-cultural education, and how that work is impossible to do without exploring the intersection with environmental issues.

“Students in Waterbury have higher rates of asthma, they’re staying home from school because they’re sick,” said Barratt. “They’re breathing in toxins on their way to school.”

“Connecticut has the opportunity to invest in a transportation system that prioritizes communities that live on the frontlines of poverty pollution and the climate crisis,” said Barratt. “TCI can help achieve this by adopting a transportation program to cap carbon emissions.”

“In Their Own Words” Breakout Room: Marissa Glaze from the Boys & Girls of Mount Vernon

Marissa Glaze spoke candidly about her time with Save the Sound as a member of the Boys and Girls Club of Mount Vernon, as well as her surprise at the amount of trash on her streets and in her waters after coming to the U.S. from Jamaica.

She spoke about her connection to the earth, her dismay about how much we are damaging it, and how important it is to get communities outside and in nature.

“I feel like poverty plays a large role in what people of color see in their daily lives,” said Glaze. “We see a lot of violence and a lot of abuse and I feel like because those issues are so major in our community we don’t have time to pay attention to the small things that are actually really big things….In my community there’s not a lot of trees and the air is very polluted. We are surrounded by so many buildings and I feel like once you step outside of our community…you actually connect to the earth.”

She ended with a video that highlighted the work Save the Sound has done with the Boys & Girls Club and spoke about the impression it had on her to be able to get out and work hands-on in her local waterways.

“I think this is what I want to do with the rest of my life,” said Glaze. “Just be a supporter of the environment.”