Kevin Kromash: What is the state of Long Island Sound fisheries?

Syma Ebbin: I would say that some fisheries in Long Island are not doing well.  The best example of that would be the American lobster, which crashed in 1999, and hasn’t shown great signs of recovery.  This year, a moratorium on lobster fishing was implemented for the first time ever.  However, fish that prefer warmer waters are actually increasing, such as black sea bass and spot.

Then you have species like striped bass, which are doing better.  They were historically overfished but were one of the first species to be targeted for rebuilding.  We instituted a moratorium several years ago on commercial fishing of striped bass, and they have come back quite well.  They are now officially considered to be recovered. This year, the Connecticut Department of Energy and Environmental Protection actually increased the “bag limit” [a restriction on the number of animals fished] for smaller striped bass, and decreased the minimum size for scup, and summer flounder.  They are trying to give more opportunity to recreational fishermen when stocks are doing well. 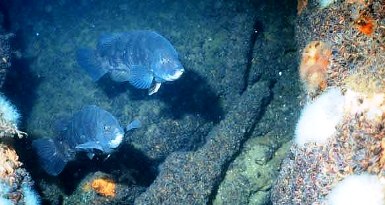 Kevin: In addition to moratoria and bag limits, what other policies or laws exist to manage fisheries in the Sound?

Syma: There are also restrictions on gear, and closed seasons – when you are not allowed to fish specific species.  The state also added a licensing system for saltwater fisheries about two years ago.  That was required by the federal government.

Syma: It was the National Marine Fisheries Service, which is part of the National Oceanic and Atmospheric Administration.  It should also be noted that, in Connecticut, a lot of our fisheries are managed through the Atlantic States Marine Fisheries Commission, which is an interstate compact with 15 states from Florida to Maine.

Kevin: What are the biggest threats to fish populations in the Long Island Sound?

Syma: Warming waters caused by climate change is certainly one of the big issues in the Long Island Sound, and the lobster is thought to be one of the first species to be really impacted by warming temperatures. Fishing may have had an impact, but the 1999 crash was mostly a function of increasing water temperatures, pathogens, and the use of pesticides like Malathion that were sprayed for West Nile Virus.  So, you had this confluence of events that triggered the die-off.

Another issue that is being caused by climate change is the acidification of water.  There has been noticeable decrease in the pH of the Long Island Sound’s waters.  That is especially going to impact shellfish and other organisms that have calcareous exoskeletons.  A lot of our bivalves, which are commercially and recreationally important, are going to be impacted.

One final issue is nitrogen inputs to the Sound.  We have these large sewage treatment plants, and their effluent typically contains nitrogen, which can lead to eutrophic conditions in some of our estuaries.  That’s a problem, because this can cause die-offs of living marine resources. Every summer, Long Island Sound has this type of “hypoxic” condition in the western part of the Sound, closer to New York where there is less circulation of ocean waters, and there is a lot of nitrogen input from sewage effluent and stormwater runoff. But we are starting to get a handle on this issue in the Sound, at least on the sewage treatment side of the equation.

Kevin: What tools are being used to get a handle on the issue?

Syma: We have the Clean Water Act, which has allowed the state to set a total maximum daily load of nitrogen, called a TMDL, which can be discharged to Long Island Sound.  And we have a really innovative nitrogen trading system, which has created a market for nitrogen.  So, sewage treatment plants have a certain number of nitrogen credits, and if they exceed that in their effluents, they are forced to buy additional ones.

Kevin: Let’s move on to the Sea Grant program.  Can you explain what the program generally is, and Connecticut Sea Grant?

Syma: Sea Grant is a system of 33 state programs focused on coastal communities and ecosystems.  It is a federal-state partnership; the National Oceanic and Atmospheric Administration is the federal partner, and they usually work with a university in the state.  Sea Grant tries to work with local folks on the ground who know what is needed in that state. In Connecticut, we have extension and outreach folks, others doing education and communications, and then we also have a research funding branch, which is what I am in charge of.

Kevin: What work does Connecticut Sea Grant do on fishing and aquaculture in the Long Island Sound?

Syma: One of the people in our office has worked extensively on invasive species, developing programs to raise awareness of marine invasive species, and the way they are transported.  We also have two outreach folks who work on shellfish and aquaculture, and right now they are working with the state agencies to develop a Connecticut state shellfish management plan. One of the grants that we recently funded was to a professor at UConn Stamford named Charles Yarish, and he’s been working on techniques for growing seaweed in the Long Island Sound.  I believe the first commercial harvest was in the Thimble Islands just this year, so we’re actually starting to have a commercial aquaculture industry that is growing seaweed! (Look for a blog post soon with more information about this exciting effort! –CFE/STS)

Kevin: What is on the horizon for Connecticut Sea Grant?

Syma: We are working with communities to aid in the planning for climate change, sea level rise, and changing coastal hazards.  That’s an area that we are really building up. So, as we move into this new world of climate change and rising seas and new hazards—we’re trying to give communities the resources they need to withstand and adapt to those changes.

This interview has been edited for length and clarity. Opinions expressed in Fridays in the Field posts are those of interviewees, and do not necessarily reflect the positions of CFE/Save the Sound.