Save the Sound and volunteers restore Sunken Meadow marsh 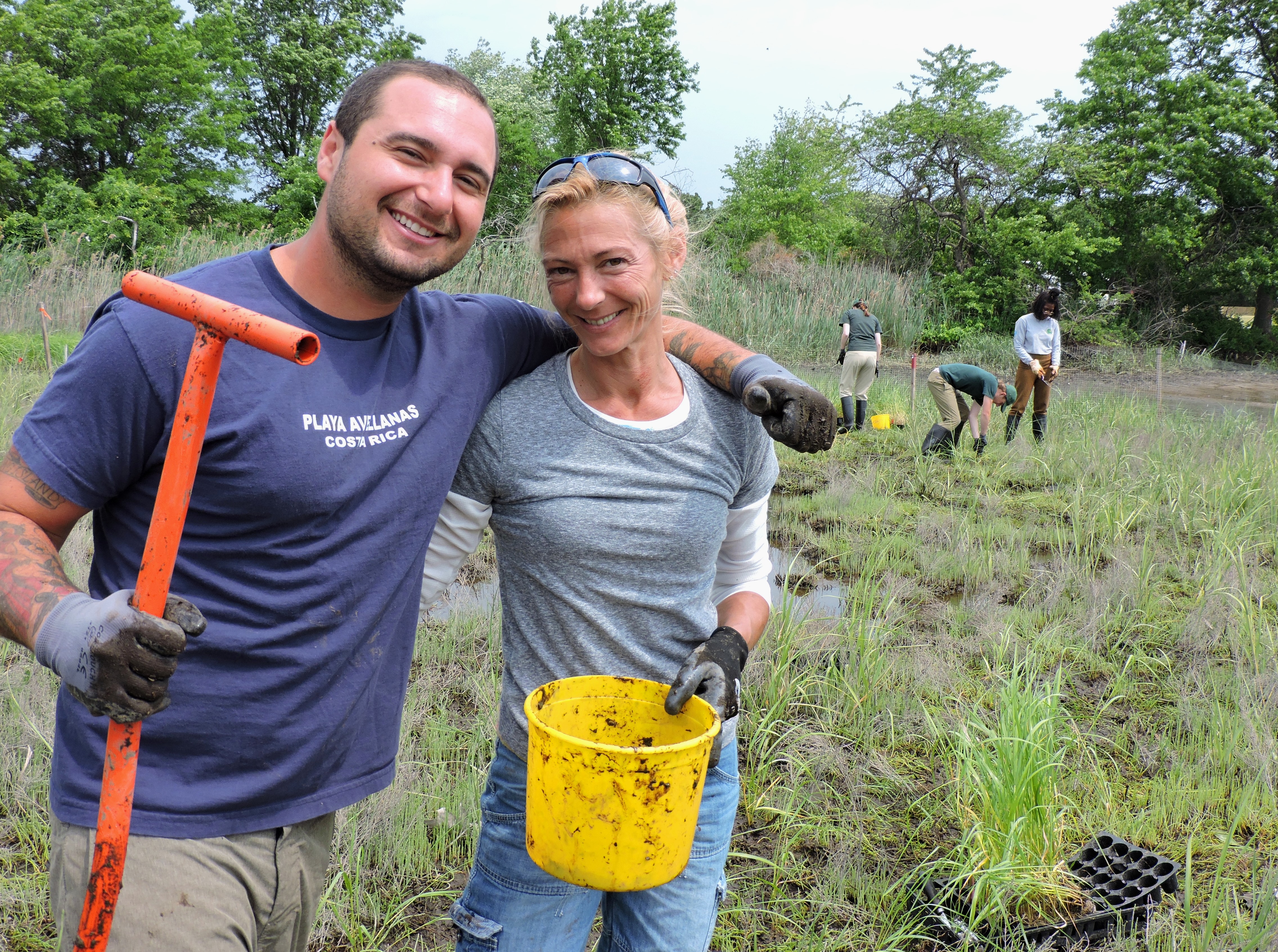 Mamaroneck, NY — Save the Sound brought together volunteers of all ages today to restore marshland at Sunken Meadow State Park. The volunteers, many of them residents of nearby towns, planted shoots of Spartina marsh grass that will take root to hold soils in place, provide wildlife habitat, and improve the park’s resilience to future storms. The effort is part of a $2.5 million-dollar project funded by the Hurricane Sandy Coastal Resiliency Competitive Grant Program and administered by Save the Sound with a team of governmental and non-profit partners.

“Nature has an incredible ability to recover when we give it the chance,” said Gwen Macdonald, green projects director for Save the Sound, a bi-state program of Connecticut Fund for the Environment. “When we did our first planting at Sunken Meadow last July, the site was a barren mud flat. Thanks to just a day of hard work by dedicated volunteers, it’s now an acre of growing salt marsh. Today’s planting will build on that effort and start to show millions of people what a comprehensive program for a healthy coastal ecosystem can look like, with cleaner water, better tidal flow, and vibrant marshes for thriving bird, fish, and wildlife populations.”

“The restoration of Sunken Meadow marsh is a classic win-win, improving the health of the Long Island Sound and strengthening our shorelines to protect us in the next superstorm,” said Congressman Steve Israel (NY-3). “I will continue to fight for funding at the federal level to preserve and protect the Long Island Sound, and improve the resiliency of our beautiful coastline.” 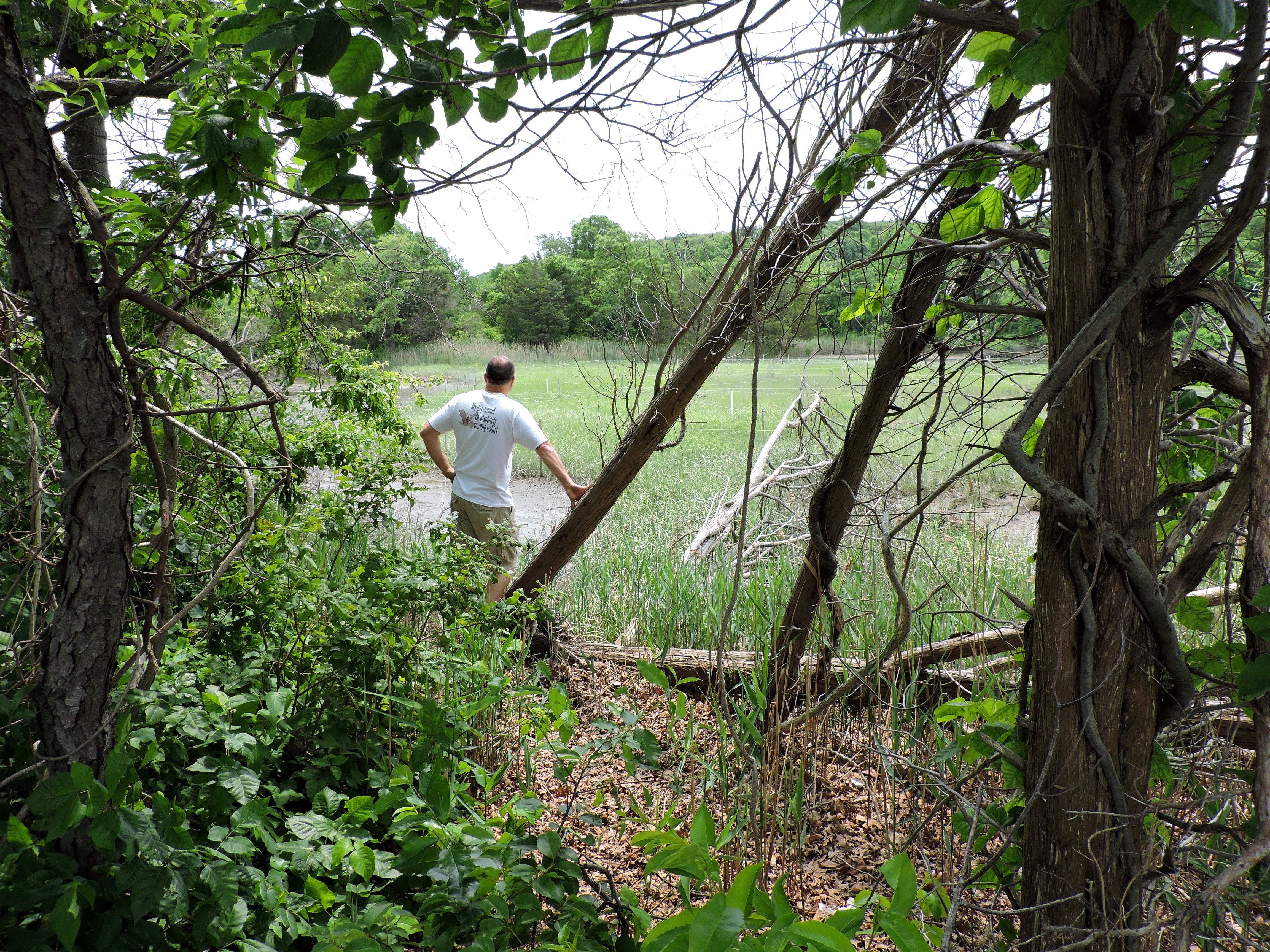 Sunken Meadow State Park comprises 1,300 acres including the mouth of the Nissequogue River, salt and tidal marshes, dunes, coastal forest, and three miles of Long Island Sound beachfront. The park has been beloved by Long Island and New York City families for generations, attracting over two million visitors a year. For decades, however, an earthen berm blocked tidal flow from over 100 acres of marsh, causing marsh die off and decreased water quality. Restoration efforts began in 2008, eventually leading Save the Sound, the New York State Department of Parks, Recreation and Historic Preservation, and other partners to develop an ambitious habitat restoration and green infrastructure plan.

The Sunken Meadow Comprehensive Restoration and Resiliency Plan is funded by federal grant dollars from the Department of Interior/U.S. Fish and Wildlife Service through the National Fish and Wildlife Foundation.

“In the aftermath of Hurricane Sandy, we have an unprecedented opportunity to strengthen natural defenses along the Atlantic Coast to protect communities and wildlife against future storms,” said USFWS Northeast Regional Scientist Rick Bennett, who leads the agency’s Hurricane Sandy recovery and resilience program. “Investments in projects like this one at Sunken Meadow support the goal of President Obama’s Climate Action Plan to make communities more resilient to increasingly intense future storms that are the result of a changing climate. They also provide opportunities for fishing, hiking, wildlife watching and other recreational opportunities that improve the quality of life for local residents.” 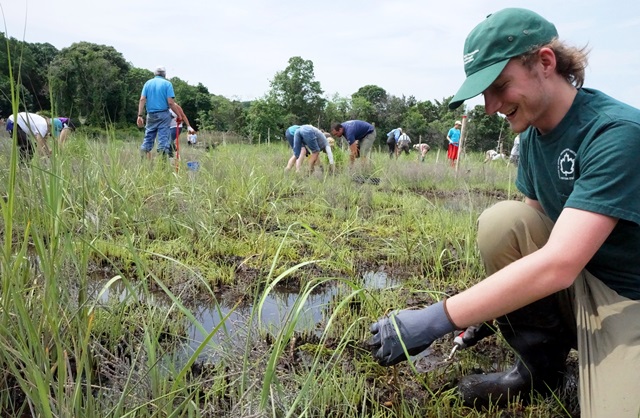 The Sunken Meadow project will make the park’s shoreline more resilient to waves and flooding, improve water quality in Sunken Meadow Creek and the Nissequogue River by reducing runoff from parking lots, and restore habitat for fish and wildlife. The partners also seek to improve public understanding of the park’s ecology through summer educational programming and volunteering opportunities like this weekend’s planting.

“This project is the result of years of hard work by a great group of partners who saw an opportunity to improve the health of this ecosystem,” said Suzanne Paton, supervisory biologist with USFWS’s Southern New England Coastal Program. “We’re thrilled to be a part of it, and thrilled with the outcome. By restoring the tidal marsh, we’re improving habitat for wildlife and making this park more resilient in the face of future storms.”

“Sunken Meadow Creek is home to one of the largest coastal wetlands on the North Shore of Long Island,” said EPA Regional Administrator Judith A. Enck. “By helping to plant marsh grasses, citizens will further improve the health of this rich ecosystem. I thank the many volunteers that are making real contributions to its restoration.”

Today’s planting is only the first major activity at the park this summer. New York Parks and Save the Sound have hired a summer education staffer to engage tourists and local students around issues of native vs. invasive species, stormwater runoff, climate change preparedness, and other topics, with a focus on opening opportunities for young nature lovers to become citizen-scientists.