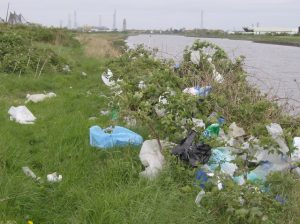 It’s small, useful, seemingly innocuous, and can be found everywhere.

Sadly, its ubiquity is having disastrous consequences for our waterways, oceans, wildlife…and maybe even our health.

Over one trillion plastic bags are produced every year. From cradle to grave, their production, use, and disposal shapes our environment from the air down to the sea.

Our Soundkeeper, Bill Lucey has some sobering facts for us:

“For the first time ever, during last year’s International Coastal Cleanup, the top ten items collected by volunteers around the world were made of plastic. Plastic grocery bags made the top five with over 750,000 picked up around the world. Our beach cleanup volunteers picked up over 1,000 in Connecticut last year.

These bags and other plastic items never truly decompose. Large pieces can choke wildlife and fill the stomachs of whales, birds, and turtles, causing starvation. They are eventually broken into tiny pieces by sunlight and water action, becoming a form of microplastic that is emerging as an enormous threat to our health and wildlife.

Recent studies have found microplastics in all humans tested, meaning that our own trash has entered our drinking water and food web where we end up consuming it. The chemical impacts of this on our bodies is still being determined, but there is some evidence that certain plastics act as endocrine disruptors that can have serious effects on health.”

What can we do?

Sure, we can keep picking up bags on our beaches, rivers, and storm drains, but that’s not enough. We must cut down our plastic addiction at the source.

Legislation and education are just two of the ways we can kick this nasty plastic habit.

There have been many bag bills enacted over the last ten years across the country. We now know which ones work and which don’t.

Our partners at Riverkeeper have been following what works here and abroad: 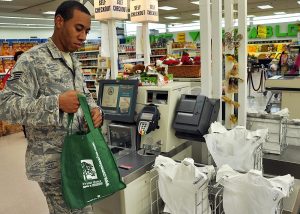 You would think a simple ban on plastic bags would work. But this type of legislation has unintended consequences that can undermine its environmental benefit. A straight ban can significantly increase the use of paper bags and thicker plastic bags, rather than encourage bringing a reusable bag to the store. When Chicago and Honolulu tried just banning plastic bags, retailers responded by switching to heavier single-use plastic bags, and paper bag use skyrocketed. The cities repealed their laws within months.

Experience and testing shows that placing a fee on single-use bags at checkout is critical to incentivizing customers to bring their own reusable bag.

Connecticut and New York each have bag bills proposals this year.

Connecticut is working to pass HB 6011, which would ban thin plastic bags and phase out thicker bags and paper bags with a 15 cent fee. Once an 80 percent plastic bag reduction is reached, or three years have passed, paper bags would cost 25 cents.

New York has three bills. One from Governor Cuomo is a straight ban. Those in the state Senate and Assembly, S95 and A5753, include a fee of 10 to 25 cents on thicker plastic and paper bags and are modeled in part on California’s successes. In San Jose, reusable bag use increased from 4% to 62%—if we can replicate that in New York, it will be a huge win for the Sound. Read more about the proposed bills here.

Suffolk County, New York, is a step ahead and has already passed a local bag ban with a fee. Read all about it here.

For those of you in New York, send your own testimony to your New York legislators with this easy action form!

Globally we’ve produced over 8.3 billion metric tons of plastic and it’s estimated that only 9% of plastic waste generated globally—and only about 5.5% of plastic bags, sacks, and wraps!—has been recycled.

These bags are made from petroleum byproducts mostly sourced from natural gas. We buy organic products to protect the earth, but when we dump it all into a plastic bag, we’re not only hurting our waterways, we’re polluting our air with dirty fossil fuels.

What about paper bags? They do break down over time, true. But paper bags are much more water-intensive to produce and heavier to transport, so using paper may also lead to an increase in greenhouse gas emissions.

It costs a lot of money and volunteer time to keep plastic bags from polluting our environment, wildlife, and seafood. So reducing them at the source saves taxpayers money!

Here are more facts and figures from Beachapedia:

Check out all the facts and figures here: http://beachapedia.org/Plastic_Pollution_Facts_and_Figures

And sign up for Save the Sound’s email action network to get the latest developments in the war on plastic pollution all around Long Island Sound.

Wednesday, October 27, 6:00 p.m.
Webinar: What is TCI? A Conversation on CT's Clean Transportation Future - What does Connecticut's transportation future hold for state residents? How can community leaders, elected officials, and state agencies all work together to support a climate resilient Connecticut? Learn more about the proposed Transportation & Climate Initiative from our esteemed panel.