“PFAS.” It doesn’t mean much at first, but the more you read, the more worrying these four letters get–and unfortunately, they were recently released into the Farmington River.

Per and polyfluoroalkyl substances–aka PFAS–are used in non-stick cookware, stain-resistant clothing, and in a kind of foam used to suppress jet fuel fires. The problem is that they’ve been linked to cancers, thyroid and reproductive problems, and immune disruption, and once in the environment they don’t break down. 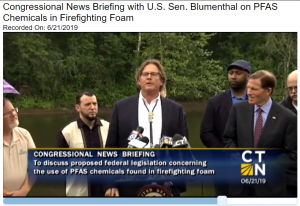 And now, just a few weeks later, up to tens of thousands of gallons of PFAS foam-contaminated from Bradley Airport made their way through storm drains to the Farmington River. The Farmington is one of the best trout streams in the world, and was recently designated a Wild & Scenic River.

CT DEEP is testing the local and downstream environment. There is not believed to be a threat to drinking water. For now, though, avoid eating fish or ingesting water from the Farmington River. Our Soundkeeper and attorneys are monitoring the situation closely, and we’ll continue to seek appropriate protections to ensure this doesn’t happen again.

NEW: As of June 24, CT DEEP found PFAS levels are still elevated in the river

Read about the spill, and about PFAS risks, in the Hartford Courant

(Hartford) – The recent report of PFAS contamination of the Farmington River is serious and should be a wake-up call for state action.  PFAS refers to the class of per and polyfluoroalkyl substances, man-made chemicals designed to make products anti-stick and stain, grease and water resistant, and used in firefighting foam to suppress jet fuel fires.  They are found in non-stick cookware, food packaging, textiles, outer gear and even some brands of dental floss.

Known as “forever chemicals” the fluorine-carbon bonds do not break down in the environment, are taken up by wildlife and have contaminated ground and drinking water sources across the country. PFAS chemicals have been found in 610 sites across 43 states, including New England and in private wells in Greenwich, CT. It is estimated that drinking water sources serving 19 million Americans could be affected. PFAS chemicals are linked to kidney, liver and testicular cancers, thyroid disruption, reproductive disorders and impaired immunity from vaccines in children.

“PFAS contamination of the Farmington River is serious–both for human health and the environment,” stated Anne Hulick, Connecticut Director of Clean Water Action. “It is ironic that Clean Water Action’s priority bill to restrict a significant, unnecessary source of PFAS contamination from firefighting foam was not passed during this legislative session.  I hope this tragedy spurs more action from the General Assembly to prevent future spills, ensure proper clean up, and adoption of strict drinking water standards,” added Hulick.

“We have inadequate safeguards along our waterways, which should include wide riverside buffers of plants and natural catchments to capture and filter runoff and spills before they reach the water,” said CFE/Save the Sound’s Soundkeeper, Bill Lucey. “Unfortunately, the state legislature this year failed to ban toxic PFAS in foam and food containers, and to allow towns tools such as stormwater authorities to fund creation of natural filtration systems to protect our rivers, which all flow to Long Island Sound.”

“Our members are saddened and outraged that the newly-designated Wild and Scenic Lower Farmington River has now been polluted – in an entirely preventable way – with a PFAS chemical found in airport firefighting foam,” said Bill Dornbos, Executive Director of the Farmington River Watershed Association.  “We urge Connecticut officials to move quickly to prevent further harm to the River and all of the state’s precious water resources by taking common sense steps to safeguard the public and the environment from PFAS contamination. One spill is always one too many with these dangerous ‘forever chemicals’.”

“Accidents happen, but this kind of contamination is completely avoidable,” said Lou Rosado Burch, CT Program Director for Citizens Campaign for the Environment. “Research tells us PFAS chemicals found in firefighting foam are extremely persistent groundwater contaminants, and they are linked to a range of serious human health impacts.  This spill demonstrates that these dangerous chemicals are present at our airports, and that the CT General Assembly can no longer afford to delay restrictions for use of PFAS firefighting foam.”

“The tragic irony of the contamination of the Farmington River is that just last month the leadership of the Connecticut General Assembly’s Public Health Committee allowed legislation to die that would have taken steps to end unnecessary use of dangerous toxic foam at airports and elsewhere in CT,” said Chris Phelps, Environment Connecticut State Director. “The Connecticut Department of Energy and Environmental Protection should take immediate steps to end use of PFAS-containing foam in the state as quickly as possible. And the governor and legislature should act to end wider use of these deadly chemicals to protect our rivers, streams, and drinking water from contamination.”

“Clean Water Action is organizing a conference to educate policy makers, advocates and Connecticut residents on the health and environmental impacts of PFAS.  We must take comprehensive actions to prevent this from ever happening again, to reduce additional sources of exposure and to set strict drinking water standards,” added Hulick.