This is the first time a bill aimed at protecting Plum Island has passed both the House and Senate and made its way to the President.

While the bill prevents the GSA, the federal agency tasked with auctioning Plum Island to the highest bidder, from using any of its funding to market, process, or sell Plum Island over the next year, it is only a temporary delay until 2021. The Preserve Plum Island Coalition will continue efforts for permanent protection.

In a bicameral and bipartisan effort over the past several years, lawmakers from both sides of Long Island Sound have been working to delay a sale and ultimately repeal the misguided 2009 law that initiated the federal government’s sale of Plum Island. The 2009 law is a result of the 2008 plan to relocate the animal disease research facility on Plum Island to Manhattan, Kansas. (See what federal lawmakers and advocates are saying at the end of the release.)

The Preserve Plum Island Coalition would like to thank our congressional champions, the countless concerned citizens and stakeholders, and lawmakers from around the country who worked to make this positive and important step forward towards permanent protection of Plum Island.

Plum Island is an 840-acre island in the eastern end of Long Island Sound that provides habitat for several federally endangered and threatened species of flora and fauna, including Piping Plover. The waters surrounding it provide fish for endangered roseate terns and are home to federally-listed marine species such as Kemps Ridley sea turtles and Atlantic sturgeon. Seals haul out on its rocks, one of the largest such assemblages in southern New England.

WHAT ADVOCATES AND LAWMAKERS ARE SAYING

“I’ve long maintained that the sale of Plum Island would be a huge loss for Long Island and New York. The 840-acres of unique habitat, which is home to a variety of rare wildlife must be preserved. This new delay in the sale of Plum Island is a step in the right direction, and I remain committed to continuing to fight tooth and nail until we prevent this ecological treasure from ever falling into the hands of a developer who would rip apart its natural beauty.”

“This provision is a welcome step in the right direction—delaying the sale of Plum Island for one year. Our work is far from over, and I am committed to continued efforts to permanently repeal the outdated and wrongheaded mandate to sell Plum Island to the highest bidder. Plum Island should be protected and preserved—it is an environmental treasure with pristine beaches, miles of natural shorelines, and critical habitats for hundreds of types of plants and animals. We cannot allow this ecological gem to be devastated by private developers.”

“New York is home to some of our country’s most treasured natural sites, with Plum Island being one of the most beautiful and significant. Unique endangered species live on the island and we must protect this wildlife and their homes. I am pleased that the year-end appropriations bills included a provision to delay the sale of Plum Island for a year, but this is not enough. It should never be sold off. I will continue to fight in Congress to preserve Plum Island’s natural beauty and environmental importance.”

“This is a big win. For the first time since the sale of the island was put into motion, we have placed a firm legislative ban on its sale. Plum Island is an ecological gem and home to hundreds of species of wildlife and important historical sites, and I’ve fought hard against efforts to sell this treasured island. I want to applaud my colleagues for our successful effort in protecting this island, and I’ll continue to use my seat on the Appropriations Committee to prevent this island from ever being sold.”

“Not only does Plum Island offer our region a diverse wildlife and ecosystem and critical habitat for migratory birds, marine mammals, and rare plants, but it is also an essential cultural and historical resource. The current law, which mandates the sale of the island to the highest bidder, is the wrong path forward, because it does not provide for public access and permanent preservation of the island, or the continued use of the research infrastructure. The state-of-the-art research facility at Plum Island must not go to waste, and preserving this island’s natural beauty while maintaining a research mission will continue to provide important economic and environmental benefits to Long Island. I applaud my colleagues for adopting my amendment to halt the sale of Plum Island for 12 months and look forward to continuing to work with them in a bicameral, bipartisan fashion to pass my stand-alone, long-term legislation—the Plum Island Preservation Act—to permanently protect the island.”

“This week’s appropriations agreement included a great deal for our Long Island Sound community—including investments in Long Island Sound environmental work and increased funding for Sea Grant. However, the inclusion of our bipartisan amendment to restrict the GSA from marketing the sale of Plum Island was certainly a welcome achievement. We still have more work to fully repeal the sale of Plum Island, but the language included in this agreement the result of our continued efforts working across the aisle and across Long Island Sound to protect this ecological treasure.”

“This year’s appropriations language is critical to preserving the future of Plum Island. Plum Island is a priceless refuge for wildlife and native plants that, once developed, cannot be restored. While not a full repeal of the previous language, we have successfully delayed the sale of Plum Island and will continue to work to ensure that its value as an ecological, historical, and cultural treasure is protected for future generations.”

“While we have more work to do in D.C. to get a full repeal of the original law that requires the sale of Plum Island, the 12-month delay is the best holiday present for the effort to permanently protect this environmental and historical gem. Thanks to all the House and Senate members who are working to keep the island safe from the shovels of developers.”

“The Nature Conservancy thanks Congress for taking this significant step that prevents the sale of Plum Island for the next 12 months. We value the leadership of members in both houses as we work together in support of the conservation of this important resource, which provides habitat to wildlife and unique opportunities to learn about our natural resources. We look forward to working with the House and Senate in the next session to ensuring a more permanent solution, starting with a full repeal of the mandate to sell Plum Island.”

Leah Schmalz, chief program officer for Save the Sound:

“After years of advocacy we are thrilled that Congress put the brakes on Plum Island’s sale. We are thankful for the efforts of our Senators and Congressmen and women, our allies in the Preserve Plum Island Coalition, the states of New York and Connecticut, and each citizen who fought tirelessly to make this legislation possible. But we aren’t counting our Piping Plover chicks before they hatch. Much work remains as we all continue fighting for the permanent protection of this historically and ecologically significant oasis in Long Island Sound. We look forward to our renewed efforts in the new year.” 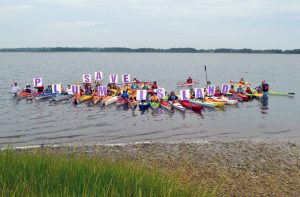 The mission of the Preserve Plum Island Coalition (PPIC), now with 109 member organizations, is to secure the permanent protection of the significant natural and cultural resources of Plum Island. The PPIC advocates for comprehensive solutions that safeguard this national treasure; this includes dedicating Plum Island’s undeveloped acreage, approximately 80% of the island, as a National Wildlife Refuge, or creating a preserve providing equivalent protection in perpetuity. The PPIC recognizes the existence of the Plum Island Animal Disease Center (PIADC) and the jobs supported by this facility. If the Center is closed, and no adaptive reuse occurs, the PPIC supports the removal of non-historic buildings and surplus infrastructure, the clean-up and restoration of any impacted resources and the dedication of the PIADC property as conservation lands.