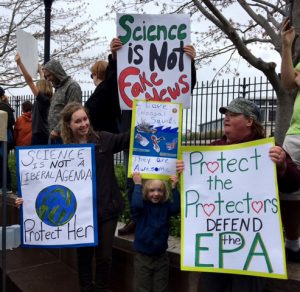 What’s the secret ingredient behind many of our advocacy victories? You! Lawmakers listen when their constituents speak up together, and big corporations think twice when faced with people power. And of course, there’s nothing like crowds of committed citizens to make an on-the-ground difference.

We’re proud to partner with you. Here are some of the activist victories we’ve achieved together.

Today, it’s hard to believe a multi-story natural gas facility was ever proposed for the middle of Long Island Sound. But for a while it was a real possibility—defeated by the outrage of New York and Connecticut residents. Broadwater was first proposed by Shell Oil soon after the merger of Connecticut Fund for the Environment and Save the Sound, and this allowed us to throw both CFE’s legal and coalition-building power and Save the Sound’s grassroots advocacy expertise at the problem. Fishermen, nurses, firefighters, mayors, marina owners, and more joined our Sound Alliance opposing the project, and we delivered their thousands of signatures to the Federal Energy Regulatory Commission. After years of unrelenting public opposition and a critical denial by New York State, Shell withdrew the plan.

On a shelf in our office sit three shoeboxes stuffed with postcards. These are the voices of thousands of Connecticut citizens speaking to state officials in 2004, demanding strong car emissions standards to protect state residents from air pollution. We delivered those signatures, and they helped win some of the strongest standards and labeling requirements in the country.

A few years later, many of these same citizens—plus organizations and municipalities all over the state—re-activated to help us build Stop Global Warming CT, a massive coalition that won passage of the Global Warming Solutions Act. This 2008 landmark carbon cap law put Connecticut on the map as a national climate leader. Today, our Climate First Responder activists continue to speak up for policies to meet the act’s greenhouse gas reduction mandates—like getting cleaner vehicles on the roads, making solar power available to everyone, and growing Connecticut’s energy efficiency industry.

There’s no better example of local residents speaking up to protect a place they love than the story of The Preserve. This rare 1,000-acre coastal forest in Old Saybrook, Westbrook, and Essex was slated to become a housing development and golf course until alarmed neighbors stepped up.

While Save the Sound attorneys appeared in court and at municipal commissions, area residents were working in parallel, turning out massive attendance at those hearings and organizing their neighbors. After a decade of non-stop work, they sealed the deal by winning enough votes in local bond referendums to help purchase the property for conservation! Now the forest’s wildlife is safe and its trails are open for the activists and their descendants to enjoy in perpetuity.

The coalition successes above started with an earlier battle: the campaign to protect 15,000 acres of water company land. When an international corporate merger put thousands of acres of forest and field that surround and filter the public drinking water supply at risk, we realized we couldn’t fight alone. The Endangered Lands Coalition, a partnership between environmental organizations and municipalities, mobilized residents to defend parcels of land all over the state. The effort succeeded, and led to legislation to better protect water company lands! It was Save the Sound’s first big grassroots coalition success, and it taught us to never underestimate the power of committed activists.

Thousands of Volunteers Cleaning the Coast

Every year, our region witnesses people power as thousands of volunteers head out to their favorite local beaches to pick up literal tons of trash. Save the Sound is the official International Coastal Cleanup coordinator for Connecticut, but it’s the dedicated Cleanup Captains on both shores of the Sound who motivate their friends and neighbors to return to the beaches each year. And their efforts don’t stay on the beach—the networks and public awareness that coastal cleanups build have helped pass a Connecticut law banning plastic microbeads and municipal restrictions on plastic bags around the region. It doesn’t get more grassroots than that!

Join in the Victories