In 2019, Save the Sound collected and tested water quality from Greenwich, CT, through Westchester County, to Queens, and into Nassau County. Samples were analyzed for the fecal indicator bacteria Enterococcus, which is used to determine if waters are safe for swimming. Click on each site on the map above to see what we found. The colors reflect average bacteria levels at each site. The “% Pass” and “% Fail” show how many samples passed or failed the single sample criteria for safe swimming in New York and Connecticut.

Failure is based on US Environmental Protection Agency (EPA) safe swimming criteria used in Connecticut and New York to monitor and manage beaches. >104 Entero is considered unsafe for swimming in marine water, >61 Entero is considered unsafe for swimming in freshwaters. Because wet weather causes pollution to flush off the landscape and into the waterways, and can trigger outflows of untreated sewage, Save the Sound reports on wet weather samples separately. This year, as in all past years, a spike in fecal contamination was measured after rainfall at most locations.

Though rivers remain the most polluted sites in 2019, there was a notable increase in fecal contamination at shoreline locations this year. Fecal contamination failure rates at these locations showed a troubling trend rising from 11% in 2017, to 19% in 2018, to 26% in 2019.

After showing signs of considerable improvement in 2016, the fecal contamination in Westchester County’s Hutchinson River has steadily climbed back up, now exceeding the high levels we first documented in 2015. At 1399 MPN/100 mL, the water pollution in the Hutchinson measured 40 times higher than the federal and state levels set for safe swimming waters (35 MPN/100 mL). Also, in comparison to other area rivers, the Hutchinson fared the worst by a wide margin. 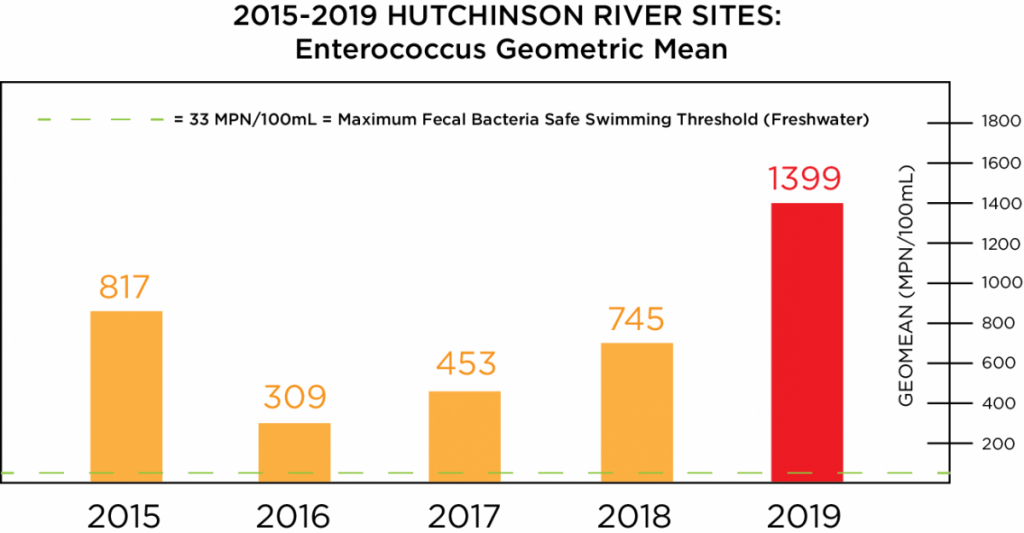 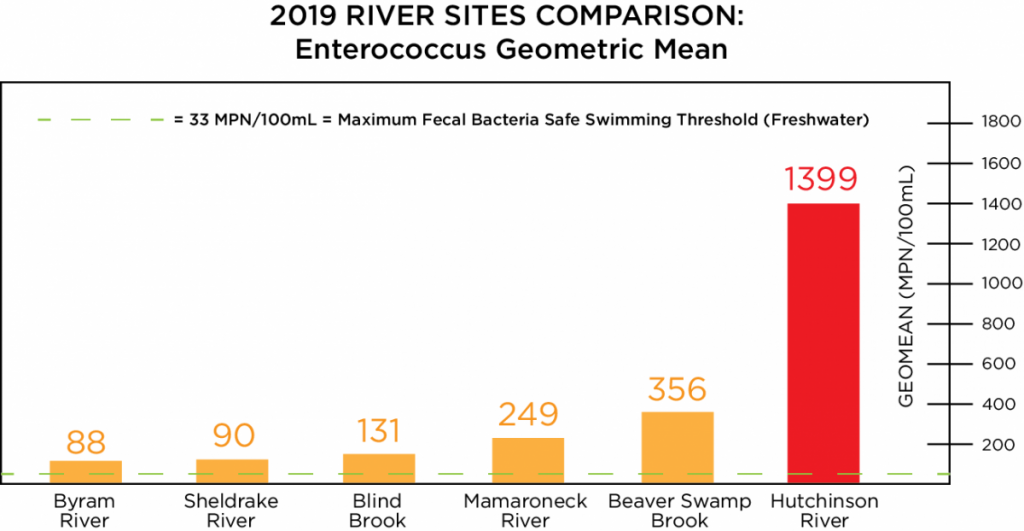 Save the Sound reported high fecal bacteria levels in Mount Vernon to the EPA, NY Department of Environmental Conservation (DEC) and the public several years ago. In response to these reports and data collected to confirm the findings, EPA took legal action against Mount Vernon, mandating inspection and repair of the city’s failing sewage infrastructure. Efforts to address the problem in Mount Vernon have been insufficient and slow.

Save the Sound again sampled numerous locations on the Hutchinson River this year and submitted results to Mount Vernon and the EPA showing the unacceptably high presence of fecal contamination. Save the Sound will continue to fight for clean water in this waterway both for people’s health and environmental protection. Read more about this ongoing water pollution issue. 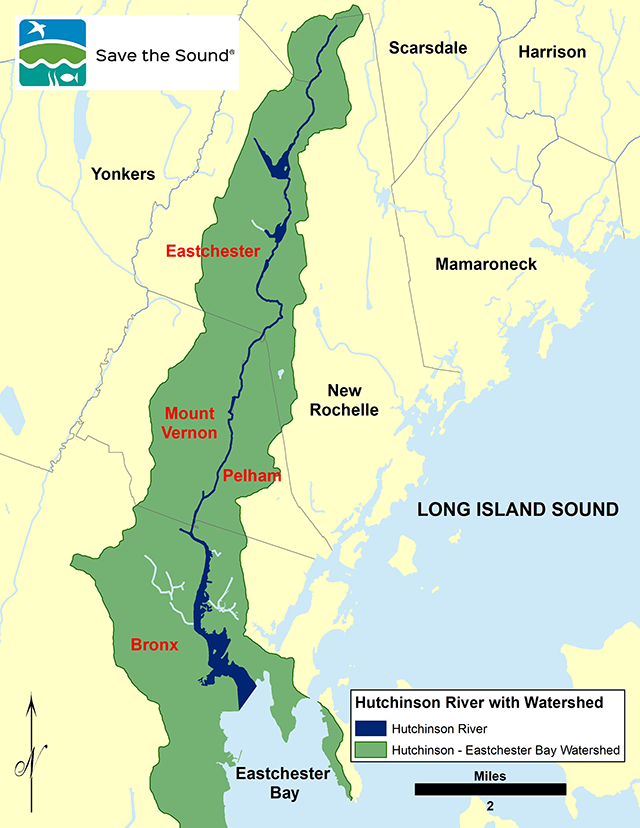 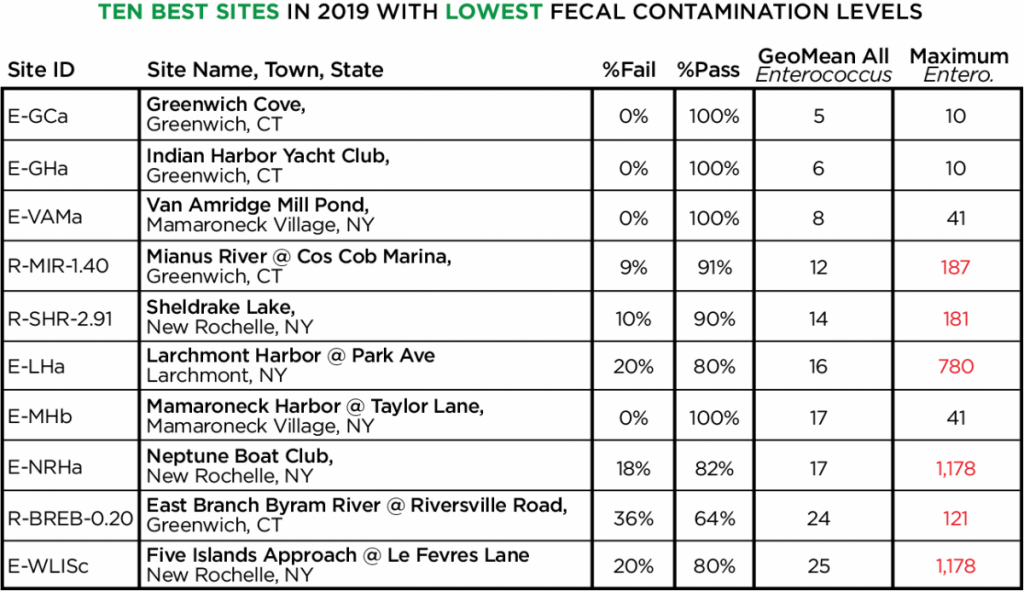 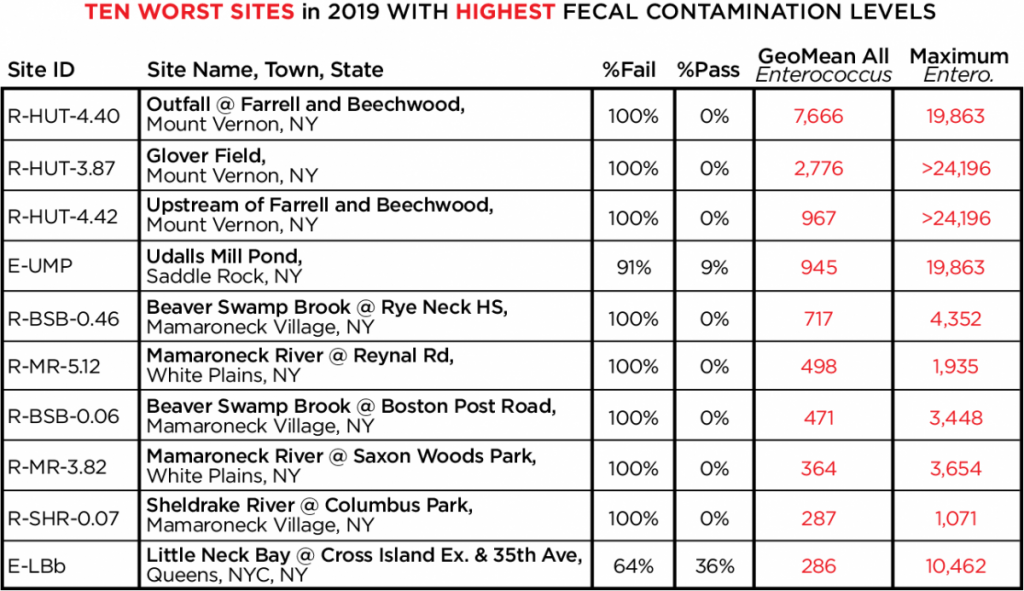 Save the Sound Remains on the Case

Save the Sound’s water quality team, which includes the ever-watchful Long Island Soundkeeper, is following up in the field on numerous monitoring locations that have high fecal contamination. Our first step is always to share the results with people and agencies responsible for the conditions in these waterways. In the coming months our team will be stream walking, paddling, and boating around these sites looking for the sources of the pollution.

We are working with Westchester County Department of Health to track down pollution sources on Beaver Swamp Brook, an ongoing effort. Our team will also be conducting a reconnaissance effort on kayaks along the shores of Udalls Millpond in Long Island to identify and sample any suspicious discharges that could be contributing to the consistently poor water quality in that tidal pond. The results will be on our blog and sent to responsible municipalities for any necessary clean up actions on their behalf. 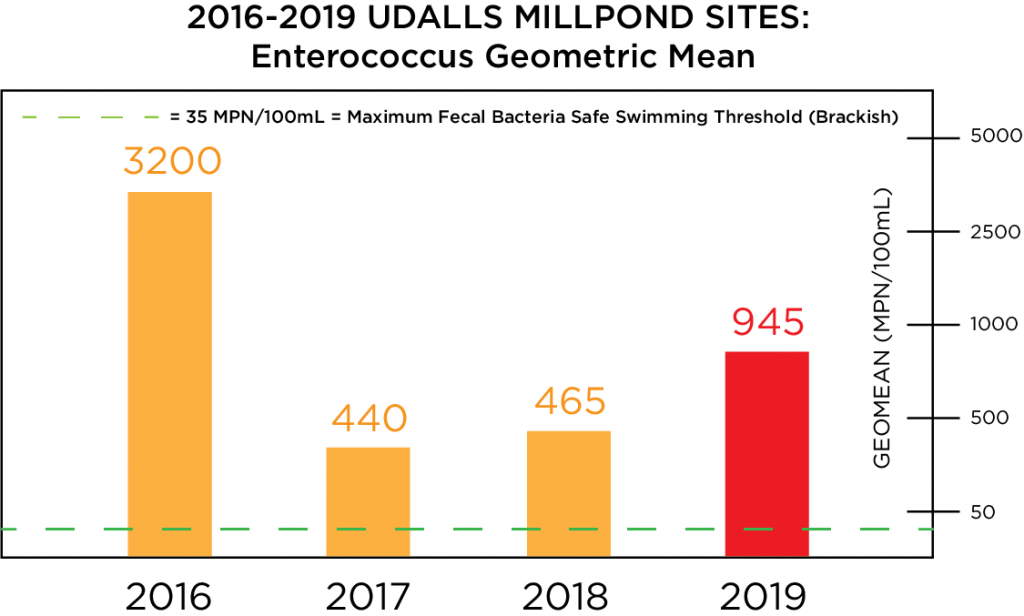