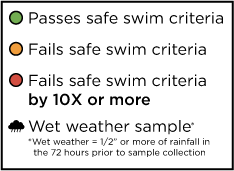 In 2020, Save the Sound collected and tested water quality from Greenwich, CT, through Westchester County, to Queens, and into Nassau County. Samples were analyzed for fecal indicator bacteria Enterococcus in marine water and E.coli in freshwater, which are used to determine if waters are safe for swimming. Click on each site on the map above to see what we found. The colors reflect average bacteria levels at each site. The “% Pass” and “% Fail” show how many samples passed or failed the single sample criteria for safe swimming in New York and Connecticut.

Fecal contamination rates dropped one percent from the five-year high documented in 2019, to an overall failure rate of 54%.

Failure is based on safe swimming criteria used in Connecticut and New York to monitor and manage beaches. Because wet weather causes pollution to flush off the landscape and into the waterways, and can trigger overflows of untreated sewage, Save the Sound reports on wet weather samples separately. This year, as in all past years, fecal contamination was higher after rainfall at most locations.

Rivers in Need of Attention

Numerous rivers monitored by Save the Sound have unacceptable fecal contamination, and the worst of those saw the contamination levels rise in 2020. These rivers often meander throughout our community and in some areas do not appear to the naked eye to be polluted. The Hutchinson River, Beaver Swamp Brook, Mamaroneck River, and Blind Brook are consistently the worst rivers in our annual monitoring effort. In addition to the poor results from weekly samplings, Save the Sound has reported at least one illicit discharge of pollution in each of the rivers in the last five years. Refer to the take action section of this page to see how you can help restore water quality in these rivers with Save the Sound. 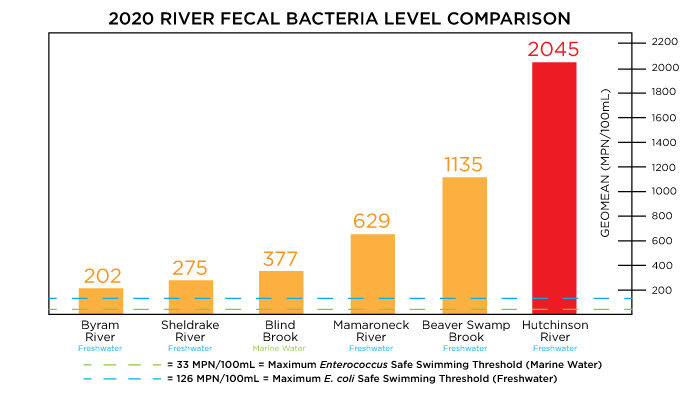 Dry Weather Failure Rate is the Highest in Rivers

Dry weather samples collected at rivers had a 71% failure rate in 2020 which is notably higher than bays and harbors (“embayments”) and the Long Island Sound shoreline. Scientific findings have shown that degraded and leaky sewer lines can cause fecal contamination in waterways during dry weather. Sewer lines are engineered to run from high locations to lower ones wherever possible, using gravity to move wastewater to treatment plants, and often run alongside or very close to rivers and streams. Untreated sewage in these circumstances can ooze out of cracked pipes and into waterways such as the rivers sampled by Save the Sound.

There was an 80% failure rate of samples collected during wet weather from river sites in 2020. Stormwater often carries fecal contamination and other pollutants into the nearest river or stream. It is especially problematic when it falls on areas with a high percentage of impervious surfaces like pavement. Reducing impervious surfaces and maintaining vegetated river and stream banks can greatly improve water quality in rivers.

In addition to the direct discharge of stormwater into rivers, large storm events can overburden compromised sewer lines causing sewage to erupt from manholes and pump stations before making it to treatment facilities. This raw sewage often makes its way to rivers and then Long Island Sound. There is an unacceptable frequency of these occurrences in the area Save the Sound monitors for bacteria. 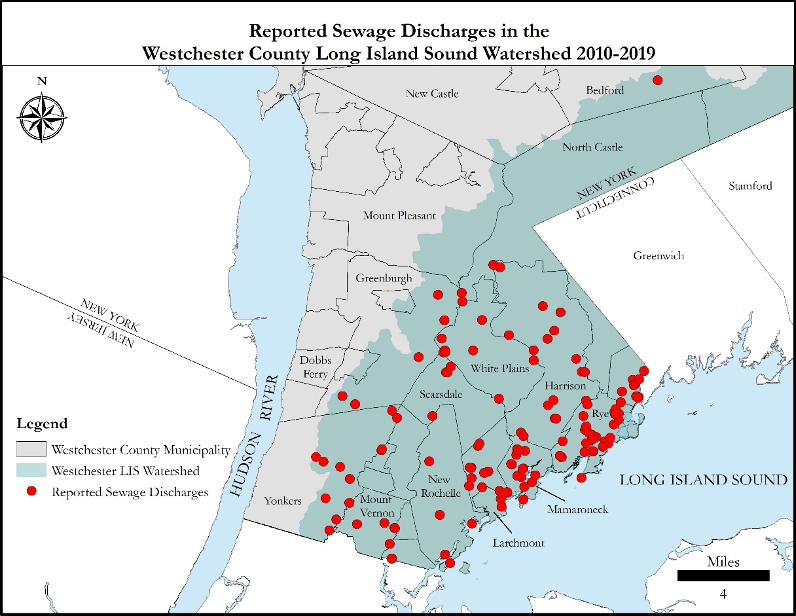 Save the Sound Legal Action

In 2015, Save the Sound filed a lawsuit for violations of the Clean Water Act against Westchester County and the following Sound shore municipalities: Harrison, Larchmont, Town of Mamaroneck, Village of Mamaroneck, New Rochelle, Pelham Manor, Port Chester, City of Rye, Rye Brook, Scarsdale, and White Plains. The lawsuit addresses the widespread state of disrepair of the underground sewer pipes and other parts of the sewer collection systems in these municipalities. For many years, these leaky collection systems have contributed to the poor water quality results we document in waterways along the Sound shore in Westchester County.

As a result of this lawsuit 531 miles of local sewer lines have been inspected to date and 38,604 defects in those sanitary sewer collections systems have been identified for repair. The defendant communities are securing NY State grant funding to perform the needed repairs. 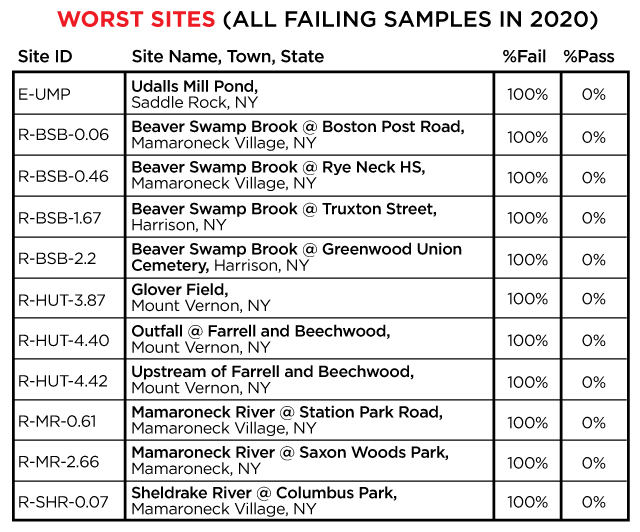 As long as rivers, streams, and our coastline are still polluted, Save the Sound remains committed to restoring water quality where people swim, fish, and paddle. Save the Sound encourages all members of the public to be on the lookout for water pollution and report anything they see to their local health authorities and to Save the Sound at pollution@savethesound.org.

Saturday, April 24
Rock to Rock - Help protect your regional environment while enjoying time outside with your local community. Cycle, walk, run, or hike on one of the given routes in New Haven during the April 24 event, or participate on your own from wherever you are.