The Connecticut legislative session ended Wednesday night, and what a session it was! Highlights included big victories for Long Island Sound and some pitched battles including amazing grassroots efforts around clean energy and GMO labeling.

CFE/Save the Sound worked on legislation including: 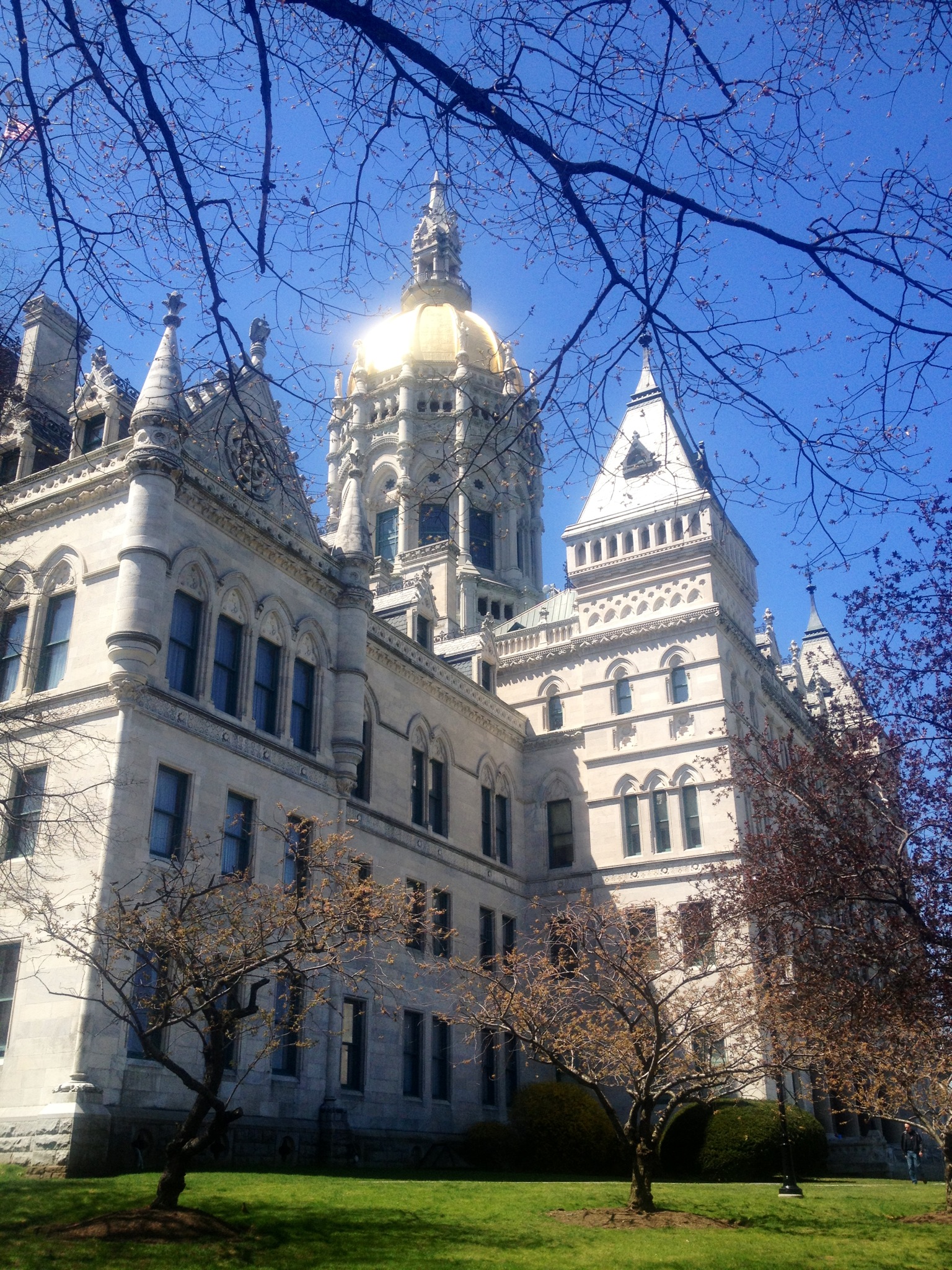 Keep reading for details of the most important bills in each area, and reactions from our staff.

(Note: for your convenience, bill links go to the plain-language analysis of each bill, not the actual legislative language.)

In a strong session for Long Island Sound, a big victory on Clean Water Funding stood out. An authorization of $997.4 million for the biennium (in a bonding bill) will “fuel continued progress toward stopping raw sewage discharges into our rivers so we can heal the dead zone that plagues Long Island Sound and keep our beaches open each summer,” said Leah Schmalz, director of legislative and legal affairs for Save the Sound. “Investing in safe, healthy waters creates jobs in the construction industry, in tourism, and in the fishing and shellfishing trades.” Read more about the Clean Water Fund on our website.

“Progress on developing stormwater authorities for shoreline cities is another great step forward in protecting the Sound’s water quality, as well as apportioning costs more fairly to lower costs for residents and encouraging the use of green infrastructure,” added Schmalz. Senate Bill 461 provides the City of New London, one of three pilot towns currently enabled to develop stormwater authorities, with municipal tools like bonding and enforcement that are needed to operate an authority.

Schmalz praised the leadership of the Shoreline Preservation Task Force, which began the difficult task of creating new policies to protect our shoreline and environment in the face of climate change. This session it put forward several recommendations related to sea level rise adaptation and storm preparation. “Senate Bill 1010 will help prevent sewage spills in the future by allowing the state to consider rising sea levels when awarding Clean Water Funding for wastewater treatment upgrades and when siting new plants,” she said. “At the same time, we must be careful that preparing our communities for storms does not further damage natural shoreline landscapes like marshes and dunes, which absorb flooding and buffer against waves.” Worrisomely, some sections of S.B. 1012 may retroactively permit structures and expand the circumstances in which property owners can build seawalls—which limit public access to the shore and can worsen erosion at neighboring properties. Other sections of the bill, however, provide for the creation of a best practices guide for coastal structures, allow the use of dredged material to rebuild beaches, and direct the state and towns to consider sea level rise in their development plans and emergency plans.

Schmalz applauded the unanimous passage of a program to provide dredging assistance to certified Clean Marinas, calling H.B. 6528 “a triple win for the Sound that recognizes and rewards the leadership of marina operators who are good environmental stewards, improves access for boaters, and boosts our marine industries.”

H.B. 6441 improves public safety by permitting dams to be inspected by qualified private engineers. The bill is also expected to encourage the removal of unnecessary dams. An amendment on the bill restricts the use of methoprene and resmethrin, larvicides that are used to control mosquitos but which may harm lobsters. “The addition of the pesticide restriction makes H.B. 6441 twice as beneficial for marine creatures,” said Schmalz. “Fewer insecticides like these in the water should help protect our devastated lobster population, and the removal of dams will restore access to our rivers for migratory fish that need to travel upstream to spawn.” In a further win for aquaculture, this session even included measures to support Long Island Sound’s new seaweed farming industry.

Outcomes were mixed for inland waters. Senate Bill 807 encourages water conservation, but early attempts to establish statewide water planning petered out. As the current controversy over a proposal to divert water from the Farmington River watershed to the UConn campus and nearby development shows, Connecticut is in need of long-term strategies to manage and conserve our inland waters in a coordinated manner.

Energy legislation was particularly high-stakes this year, with big bills around the state’s new Comprehensive Energy Strategy and revisions to the Renewable Portfolio Standard. Late in the session, the state budget raided $25 million from the Clean Energy Finance and Investment Authority and allowed RGGI auction proceeds to be redirected from state energy efficiency programs to CEFIA. While this is an improvement from the original proposal (read reactions to the original raid from CFE and allies here), it is a direct hit to these important programs.

“Connecticut’s clean energy and energy efficiency programs are key economic drivers for our state—they save money for families, attract new businesses, and clean our air,” said Mark LeBel, energy fellow for CFE. “Getting Connecticut back to number one in energy efficiency and innovation in clean energy finance have rightly been signature goals of the Malloy administration. It’s extremely disappointing that this fight over funding had to happen at all. Dollars invested in these funds are returned to the economy many times over, so it is counterproductive to balance the budget in the short term by taking money from them. We will still be increasing energy efficiency funding but this budget shuffling will slow us down from getting where we want to go.”

“The debate over Connecticut’s Renewable Portfolio Standard was a great illustration how important renewable energy has become to our state,” said LeBel. “It is to the credit of thousands of concerned citizens and some principled legislators that the final version of Senate Bill 1138 was much improved, though it still risks dilution of our renewable energy standards by allowing the Department of Energy and Environmental Protection to count large-scale hydropower as a Class 1 renewable. We are counting on DEEP to use the authority in this bill responsibly and to take full advantage of the provisions that allow a large procurement of long-term wind contracts. This session also saw numerous sensible changes that will help grow localized clean energy generation across the state. The new energy initiatives started this session can, if used correctly, be a springboard for long-term success.”

“In such a difficult budget year, we are pleased that the legislature recognized the importance of public transit to building healthy communities and getting workers to their jobs,” said Karen Burnaska, coordinator of CFE’s Transit for Connecticut coalition. “The biennial budget maintains existing bus service and raises fares to $1.50. All necessary transit projects have received the bonding approvals they need. Transit for Connecticut and other transportation advocates are pleased with S.B. 975, which requires that starting in 2015, the often-raided Special Transportation Fund must be only for transportation purposes. This has been a long time coming, and represents a shift that should help stabilize funding for transit and reassure Connecticut citizens that their tax dollars are being used wisely.”

Sections opening water company-owned lands to telecommunications towers and making economic development a consideration in formulating aquifer protection regulations were included in an unrelated energy bill, H.B. 6360. “Weakening environmental protections for drinking water lands is a bad idea for Connecticut’s environment,” said Lauren Savidge, legal fellow for CFE. “We’re concerned that these changes not only put the public water supply at risk, but threaten the open spaces that provide wildlife habitat, beautiful vistas, and opportunities for recreation. Alterations with such high stakes should be fully debated in public hearings, not tacked onto an unrelated bill in the final days of session.”

The Connecticut Environmental Protection Act, which protects the rights of citizens to intervene in proceedings that could harm the environment, faces threats nearly every year. This year, advocates and legislators were able to negotiate a bill that avoided weakening the statute. “The bill that passed simply clarified existing pleading requirements for CEPA that plaintiffs have been following for decades,” said CFE Senior Attorney Roger Reynolds.

CFE’s fellow advocates were hard at work, too. The state Plan of Conservation and Development was updated and stood strong against attempts to weaken it. We’re pleased that the POCD will still provide a comprehensive development strategy for the state that emphasizes smart growth and environmental protection. Last year’s “Haddam Land Swap” was allowed to expire, in a victory for the integrity of protecting lands given to the state of Connecticut for the purposes of conservation.

Perhaps most notably, this session saw passage of the nations’ first labeling law for genetically modified organisms (GMOs) in food. A passionate citizens’ movement pushed this bill through—a true grassroots victory that makes Connecticut a leader in this arena.

Thursday, March 4, 12:00 p.m.
Webinar: Climate Change in the 2021 CT Legislative Session - Join Save the Sound’s Climate and Energy Attorney, Charles Rothenberger, as we delve into our priorities for this legislative session to protect your clean air and combat climate change.