The biennial report contained remarkable evidence of improvement in Long Island Sound water quality. The report marked a welcome stamp of approval for more than a decade’s worth of federal and state investment in improvements to sewage treatment facilities in both Connecticut and New York. Save the Sound staff cautioned that individual beaches and bays face continued challenges (testing monitored “open water” conditions only), that the westernmost portion of the Sound remains stressed, and that climate change and population growth pose challenges requiring additional investment. Nonetheless, staffers and scientists alike were gratified to see proof that investment in water quality is paying dividends.

The most positive results were found in the measurement of dissolved oxygen in the Long Island Sound, a crucial barometer for the health of the waterway. Low levels of dissolved oxygen (hypoxia) can lead to fish die-offs, reduced reproduction of marine life, and other adverse conditions. Improvements to sewage treatment plants in the region have reduced the discharge of nitrogen to the Sound from those plants by 58.5% which, in turn, reduces the depletion of oxygen in the waterway and supports marine life. 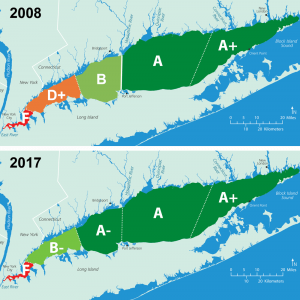 For the first time the Report Card includes 10 years of data and an assessment of how water quality is trending in each region of the Sound.

Year-to-year (or even multi-year) fluctuations in water quality can be influenced by weather conditions and other factors, so scientists are wary of identifying a trend until numerous years of data from water quality measurements are available. The 2018 Report Card includes evidence that dissolved oxygen levels, the focus of coordinated conservation efforts, have improved over the past 10 years.

The region where the improvement is the most dramatic is the Eastern Narrows, which spans the entire open coastline of Westchester County, NY to Darien, CT on the north, and the open coastline of Nassau County to Asharoken, NY on the south side of the Sound. This region went from a “D+” in 2008 to a “B-” in 2017, benefitting from both the upgrades made to its local wastewater treatment plants and those made to plants on the East River, which flows into the western end of the Sound.

Water quality in the Sound is now a far cry from conditions in the 1980s, when a steady increase in population and poorly treated sewage led to harbors full of dying fish and shellfish, dirty beaches, and waters almost devoid of oxygen. By 2000, the U.S. Environmental Protection Agency (EPA), the New York State Department of Environmental Conservation (NYSDEC), and the Connecticut Department of Energy and Environmental Protection (CTDEEP), agreed to make a significant investment in a clean and healthy Sound. More than two billion dollars were invested over the following 16 years to treat nitrogen at dozens of sewage treatment plants that discharge to the Sound—ultimately achieving a 58.5% reduction in the amount of nitrogen entering Long Island Sound from those plants. 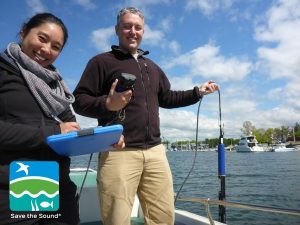 Tracy Brown, director of Save the Sound, commented, “In many respects what we’re seeing is a victory for the tenets of the Clean Water Act, as well as the commitment shown by New York and Connecticut officials, the EPA, and citizens alike. We now have hard evidence that investment in improved technology at treatment plants pays great dividends.” She added, “The most important step now is to recognize that there is more work to be done—both to keep from sliding backwards in the face of climate change and population pressure, but also to move forward so that the most heavily populated areas of the Sound share in the recovery.”

In fact, the Western Narrows, home to New York City, have remained stalled at an “F” grade (45%) since 2008. The area is densely developed, heavily populated, and has very little exchange with the Atlantic Ocean, so is still suffering from nitrogen pollution stemming from human waste and stormwater runoff. However, even this most challenging part of the Sound showed significant improvements in dissolved organic carbon in the 10-year data, leading to a sense of optimism for scientists involved in the study.

Dr. Jason Krumholz, senior environmental scientist at McLaughlin Research Corporation, a science adviser for the Report Card, commented, “This latest Report Card shows strong evidence that reducing nitrogen loads from sewage treatment plants has been effective in improving water quality throughout the main stem of Long Island Sound. However, many of the bays and harbors surrounding Long Island Sound have not shown the same pattern of water quality improvement, and require additional study. The ongoing Unified Water Study hopes to shed light on the drivers of water quality improvement in these areas.”

Save the Sound staff also encouraged area residents to take their own actions to reduce the amount of nitrogen entering the Sound from fertilizers and the roughly 500,000 septic systems in coastal communities. More information on the report and steps individuals can take to help improve Long Island Sound water quality is available at: www.savethesound.org.

About Save the Sound

Save the Sound is a bi-state program of the Connecticut Fund for the Environment with an established 45-year track record of restoring and protecting the waters and shorelines of the Long Island Sound. From its offices in Mamaroneck, NY and New Haven, CT, Save the Sound works for a cleaner, healthier, and more vibrant Long Island Sound where humans and marine life can prosper year-round. The organization’s success is based on scientific knowledge, legal expertise, and thousands of ordinary people teaming up to achieve results that benefit the environment for current and future generations. Learn more at www.savethesound.org.

Laura McMillan, Save the Sound, lmcmillan@ctenvironment.org

See What Officials Are Saying

“Today’s findings prove that investing in the Long Island Sound is paying off—but the work is far from over,” said Senator Blumenthal. “More federal investment is needed for the Sound to remain resilient, clean, and healthy– especially as climate change continues to pose a grave threat to our environment. I am grateful for Save the Sound’s tireless work and advocacy and will continue to support efforts to ensure that the Long Island Sound is protected and preserved for generations to come.”

“This report card is encouraging, but there is much more we can do,” said Murphy. “Folks in Connecticut depend on a vibrant, healthy Sound for sport and shell fishing, manufacturing, and tourism. I released my plan to restore and protect Long Island Sound, and I have used my seat on the Appropriations Committee to triple funding for the Sound in two years. This means a cleaner and more vibrant shoreline, and ultimately, it means more money flowing into local economies.”

Senator Murphy issued his own press release on the report; you can read it here.

“The Long Island Sound is a vital part of our region’s economy and character. As a Member of Congress representing the beautiful Sound Shore communities and a top member of the House Energy and Commerce Committee, I am pleased that Save the Sound’s 2018 Report Card adds additional irrefutable proof that we are making great progress in our longstanding efforts to improve and revitalize the Sound. We must continue working together to ensure its vitality for years to come,” said Congressman Eliot Engel.

“Estuaries like the Long Island Sound are among our nation’s most precious natural resources, and it is our obligation to protect them for future generations,” said Congresswoman Nita Lowey. “We know that investing in wastewater infrastructure leads directly to clean water, and as Ranking Member of the House Appropriations Committee, I have been proud to fight for federal investments in the Sound. This year, I secured $12 million for the Long Island Sound Study program in the Environmental Protection Agency, the highest level of funding in the program’s history. This historic investment is helping the Sound’s ecosystem and the local economy. We must not take our success in the Sound for granted – we should build on this momentum so the Sound can continue to support our quality of life and serve as a model for other urban estuaries that are struggling with similar challenges.”

“Growing up in New Haven, the Long Island Sound has always held a special place for me. I have fond memories of going to Lighthouse Beach with family and friends to enjoy the park—playing on the beach and swimming in the Sound. It holds a special place in my heart, as I am sure it does for the millions of people who visit the Sound every year,” said Congresswoman DeLauro. “That is why I am so proud to continue fighting side by side with advocates like Save the Sound—this year and every year—to protect the Sound, increase funding for its upkeep and restoration, maintain the hard-earned ‘A’ grade the Central Basin received this year, and continue to make progress in the Western end.”

“We know that a healthy Long Island Sound supports the economic vitality and ecological resilience of our coastal communities,” said EPA New England Regional Administrator Alexandra Dunn. “The good news is that today’s report card documents steadily improving health in the Sound. It also demonstrates the essential role of sustained investment in protecting and restoring this critical waterway. EPA looks forward to continued collaboration on nutrient reductions for an even better report card next time.”

“EPA is dedicated to wise stewardship of Long Island Sound, which is a critically important resource. This report card shows that the health of the Sound is improving, but much more work needs to be done particularly in the western sound. EPA is working closely with states, Long Island Sound communities and other partners to forge that path, emphasizing reducing nitrogen pollution, which will benefit the Sound. This will further enhance the ecological, recreational and commercial value of the Sound’s waters, as well as the quality of life for the broader community.”

“Long Island Sound is Connecticut’s most treasured natural resources, it is imperative that we continue to work together to protect it. All indications are that our multi-decade long efforts to improve water quality are working, however as a region we must remain vigilant and everyone must do their part to preserve and protect this amazing resource.”

“Improvements in LIS are evident, but what we often fail to consider is that these gains are occurring despite the ever growing pressures of population growth, sea level rise and warming temperatures. In light of these growing stressors, the gains we have made are a credit to the collaboration between states, local efforts and the scientific community.”

“The Report Card clearly shows that all the hard work and investment put into protecting the Sound is starting to pay off. Private philanthropy has played a role in this, obviously.  But we don’t see this kind of success without a community of effort.  Environmental advocates, elected officials, state and federal employees, and of course the citizens and taxpayers are the ones who have come together to make these grades possible. The Jeniam foundation is proud to play its part, as are the other members of the Long Island Sound Funders Collaborative.”

“There are real stories behind the grades in this report card, and those are the stories of local people who care deeply about the Long Island Sound and are committed to its restoration and overall health. We need to continue to clean up individual beaches and bays, and double-down to reduce pollution in the Western Narrows.”