NEW HAVEN, CONN. – At the end of the 2019 Connecticut legislative session, Connecticut Fund for the Environment/Save the Sound celebrates environmental victories and prepares to fight some unfinished battles. 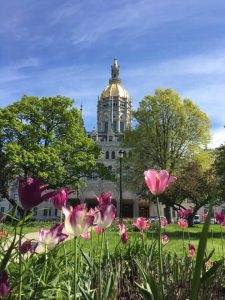 Net metering, a critical pricing mechanism that has underpinned the success of solar in Connecticut and nationwide, was scheduled to end under a bill passed last year—a move that would imperil the state’s 2,200 solar industry workers and make solar less attractive. HB5002, known as the Green New Economy bill, fixes this major problem.

“House Bill 5002 brings net metering back from the brink, and that deserves applause. It’s a move that will save jobs and help keep rooftop solar practical for Connecticut residents who want to reduce their energy bills and protect our air. Other provisions like energy storage, a land inventory and for renewable energy siting, an expansion of virtual net metering, and the green jobs ladder will help build a foundation for future growth in the renewable energy sector.

The biennial budget creates a self-supporting funding mechanism for up to $3 million per year for the Connecticut Hydrogen and Electric Automobile Purchase Rebate (CHEAPR) program and strengthens state purchasing for electric vehicles and buses.

“Forty percent of Connecticut’s climate emissions come from transportation, so there’s no clean air without clean cars and buses. We’re glad that steady funding for the CHEAPR program will help make electric vehicles affordable for more Connecticut residents, and that the state is setting a good example and making our cities healthier by switching to more electric buses and electric vehicles for the state fleet.”

In addition, the legislation calls for an environmental and fisheries mitigation plan during and after construction to ensure the latest science is used to avoid, minimize, and mitigate any impacts to wildlife, natural resources, ecosystems, and water-dependent uses such as commercial fishing.

“In order to meet Connecticut’s greenhouse gas reduction targets, we must broadly diversify and promote clean climate initiatives like energy efficiency, solar, and wind. Increasing our use of offshore wind will help meet climate goals, reduce costs for ratepayers, and create good-paying jobs that spur the green economy, and this bill opens the door for Connecticut to start taking greater advantage of those benefits. CFE applauds the general assembly for their bipartisan leadership, and the hard work of allies like the Connecticut Roundtable on Climate and Jobs and the state’s labor advocates in getting this legislation over the finish line.”

“We’re deeply disappointed at the lack of action to remedy the swipe of funds intended for pollution-busting, cost-cutting energy efficiency and clean energy programs, and the planned diversion of $54 million more later this month. Lawmakers have heard from thousands of their own constituents outraged at this diversion of dedicated funds. Until this is corrected, hardworking people will continue to be laid off, low-income families will continue to miss out on benefits they’ve already helped pay for, and avoidable pollution will continue to be spewed into our air.”

PUSHING FOR A HEALTHY SOUND, RIVERS, AND DRINKING WATER

Connecticut Has a Plan for Water

After a million-dollar, multi-year process with input from the public, environmental and water supply stakeholders, committees, health and environmental agencies, legislators, and unanimous approval by the Water Planning Council, Connecticut has its first State Water Plan. The House and Senate passed both a resolution approving the Plan, and a companion amendment on a separate bill that reiterated that the Plan would not supersede existing state statute.

Karen Burnaska, water advocate for Connecticut Fund for the Environment/Save the Sound, said:

“Everyone who fishes, swims, kayaks, or brushes their teeth should be excited about the passage of the State Water Plan. The Plan is the culmination of a million-dollar, multi-year process with input from the public, environmental and water supply stakeholders, committees, health and environmental agencies, and legislators. Together the parties crafted language that was approved by the Water Planning Council unanimously—a huge achievement.

“The current agreement, which Governor Lamont’s office has helped shape, works for everyone—as shown when it passed the House and Senate unanimously. It doesn’t change or weaken the Plan’s strong recommendations, it reiterates the importance of existing statutes, and it ensures that state law can continue to evolve to implement the Plan over time. We urge Governor Lamont to swiftly approve the legislation to start protecting our drinking water supply and Connecticut’s beautiful streams.”

Unfortunately HB7408, which would have allowed municipalities to establish municipal stormwater authorities and assess fees to fund stormwater-related projects, passed the House but wasn’t called for a vote in the Senate. Stormwater authorities create a financial incentive for runoff reduction and provide dedicated, self-sustaining revenue for large-scale projects such as sewer pipe repairs or sewage treatment plant upgrades.

“For decades, our rivers and the Sound have suffered pollution from runoff that carries pesticides, fertilizers, pet waste, and litter—and bacteria from overflowing sewers. This legislation would have established a practical, proven method of raising municipal funds to combat water pollution. It would have incentivized large landowners like big box stores and universities to reduce their costs by installing rain gardens, bioswales, blue roofs, or permeable pavement that harness the natural power of earth and plants to filter runoff and prevent flooding. We are hopeful this important legislation will pass next year.”

Reducing Use of Plastic Bags

“Our coastal cleanup volunteers picked up over 1,000 plastic bags from Connecticut beaches last year. These bags and other plastic items never truly decompose. Large pieces can choke wildlife and fill the stomachs of whales, birds, and sea turtles, causing starvation. Sunlight and waves eventually break them into tiny pieces that are emerging as a threat to our health and wildlife. Recent studies have found microplastics in all humans tested, meaning that our own trash has entered our drinking water and food web where we end up consuming it.

“We’re pleased with the final plastic bag ban amendment on Connecticut’s budget. It will impose a ten-cent fee on plastic bags for two years and ban them after that, encourages recycling paper bags, and will study how to deal with compostable plastic bags—we hope the state microplastic working group will be part of that important investigation. And critically, the legislation continues to allow towns to pass stronger ordinances if they wish. That’s a win for wildlife.”

The budget includes $75 million in general obligation (GO) bonds for the next two fiscal years and $84 million in revenue bonds for FY 2021; the bonding bill is expected to pass in a special session of the legislature.

“The Clean Water Fund is the single biggest tool in Connecticut’s water quality arsenal. It helps keep dangerous bacteria that close beaches and excessive nutrients that cause dead zones out of Long Island Sound, while reducing financial burdens on municipalities and creating thousands of jobs in design, engineering, and construction. The grants and bonds provided for in this budget will help meet the most urgent needs and shovel-ready projects, and we look forward to its finalization. There are billions more in potential projects and benefits waiting for future investment.”

By some estimates, Connecticut has between 5,000 and 6,000 dams, many old and unsafe. Some landowners don’t even realize they have one on their property. CFE/Save the Sound will be partnering with the Connecticut Realtors group and The Nature Conservancy to develop a dam disclosure educational video for realtors. This group will also draft a disclosure form and questionnaire with the Department of Energy and Environmental Protection to submit to the legislature next year.

“Many people don’t even know they have a dam on their land—old ones can be pretty hard to spot if you don’t know what to look for. That’s a liability if the dam fails. The education campaign we’ll work on will make sure Connecticut’s realtors understand the risks around dams, and how to counsel potential buyers. Ultimately we hope to encourage more property owners to have their unneeded dams removed, to reduce flood risk and reopen streams to free passage of fish.”

Resiliency in the Face of Climate Change

SB 1062 allows municipalities to establish a Climate Change and Coastal Resiliency Fund with revenue from their budget reserve funds or municipal bonds, to be used for municipal property losses, capital projects, and studies on mitigating climate change hazards and vulnerabilities, including land acquisition.

The state budget includes $100,000 for CFE/Save the Sound to conduct habitat restoration work on the West River in New Haven, continuing a holistic effort that has included installing new tide gates, removing the Pond Lily Dam, and building rain gardens at neighborhood homes.

Kat Fiedler, legal fellow for Connecticut Fund for the Environment/Save the Sound, said:

“This year we faced proposals that would have forced hasty decisions on permits and lessened environmental review, limited CT DEEP’s authority on environmental consent orders to stop pollution, reduced transparency and oversight in land use appeals, and created loopholes in the Connecticut Environmental Protection Act. There was even a rumor of attempts to weaken the state stormwater permits that keep bacteria, oils, and industrial chemicals out of our rivers and Long Island Sound.

“Thankfully, allies and legislative champions together were able to fight back or substantially weaken each and every rollback. Thanks to your efforts this session, Connecticut’s environmental protection laws remain strong and ready to defend your beloved lands, healthy air, and clean water.”

Your legislators made some real strides in protecting our climate, rivers and drinking water, and Long Island Sound–including measures that every single state senator and representative voted for! There’s also some unfinished business they shouldn’t forget.

Thank your state legislators, and ask them to keep up the good work, with this simple message.